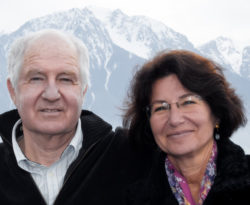 With Charles and Patricia Genoud.

This residential retreat is dedicated to the intensive practice of meditation and will take place in silence. There will be no verbal contact with the other participants and no use of mobile phones. It is intended for beginners and people who want to deepen their practice. Sitting periods of meditation will alternate with walking meditation. Every day there will also be an hour of meditation in action.

Patricia Genoud-Feldman has practiced and studied Buddhist meditation in Asia and the West since 1984. She has been teaching Vipassana practice since 1997 in Europe, Israel and the USA. Patricia was trained at the Insight Meditation Society under the direction of Joseph Goldstein, in Insight Dialogue with Gregory Kramer and in MBSR in Worcester -MA.

Charles Genoud has been studying and practicing Tibetan Buddhism since 1970. He studied with the venerable Geshe Rabten for several years, then with Dilgo Khyentse Rimpoche. He also attended the School of Dialectics in Dharamsala in 1975. He has also practiced Theravada Buddhism in Burma and the United States. Charles studied Sensory Awareness which greatly influenced his research on meditation in motion. He has developed an approach called “Gesture of Awareness”. He has been teaching Vipassana meditation since 1995.

Both Charles and Patricia are the co-founders of the Vimalakirti Meditation Centre in Geneva, Switzerland

According to the Theravada Buddhist tradition, teachers do not ask for any fees. For their living, they depend on donations offered freely by the participants at the end of the course.

The Dana or the practice of generosity is a key virtue in Buddhism, a practice to be developed on the path to enlightenment.

Fees apply to accommodation and food

Retreat held in French and/or English if necessary.