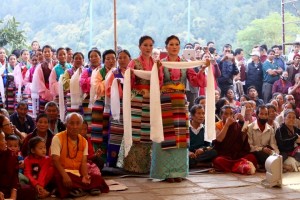 Lingdro is a sacred dance, very popular in the Tibetan Buddhist tradition, dating back to more than three hundred years ago. The origin of Lingdro can be traced back to the sublime King Gesar of Ling. Gesar was born at the end of the 10th century (1038 – 1119) and lived in the highland pasture of Sa-Kyisoe-Yak, Dhokham, the eastern prefecture of Tibet. At the age of twelve the Lingdro was first performed when Gesar won his first ever horse race and was enthroned as king of the land of Ling. These ceremonial warrior songs and dances were the principal performances enacted throughout the entire 81-year lifespan of King Gesar. Lingdro is the most beloved and respected dance because of its beauty and profound content of words indicating truth, bravery, energy, splendor and the unceasing light of happiness.

This sacred dance is known by the name of “Lingdro-Dechen-Rolmo” meaning the “Dance of Ling, Music of Great Bliss”. 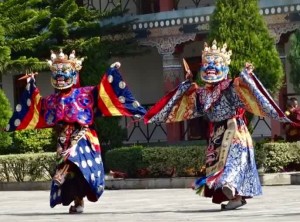 There are eight chapters that originated from the pure vision treasure-teachings of the great Jamgon Mipham Rinpoche (1846-1912), who recognized King Gesar as the “Assemblage of the Three Roots” and king of the Dharma protector Drala Werma. Lingdro is one of the vital parts among numerous cycles of teaching and Sadhana practices of Mipham Rinpoche. It was first performed and disseminated in the Dzogchen Monastery (one of the six main monasteries of the Nyingma tradition) in Dhokham. Later, the 5th Radreng Rinpoche (1912-1947), a regent of Tibet, composed an appendix and added several new chapters, after which time the Lingdro began to spread from Radreng monastery to central Tibet. It gradually developed into a new concept consisting of the tone, steps, movements and expression, full of blessings that mark a great milestone within the history of Lingdro, guided by dance-master Tagsar Norbu Sangpo, a descendent of the Mukpo-Dong lineage. Thus, the tradition of sacred Lingdro dance became well established and flourished widely. During the later half of the 20th Century, Tibet’s rich cultural heritage and Buddhist teachings, including the Lingdro, faced the danger of extinction.

In India, the commencement of Lingdro training began in the Odisha Phuntsokling Tibetan Settlement, under the guidance of dance-master Tagsar Norsang and his daughter Yangzom. In accordance with the oral command and advice given by Kyabje Dudjom Rinpoche (Supreme Head of the Nyingma School of Tibetan Buddhism), they continuously taught and trained young Tibetans with sincere motivation and the first Lingdro Association in exile was formed in Odisha. This marked the very beginning of the sacred Lingdro tradition outside of Tibet. In 1964, Lingdro was performed when His Holiness The Dalai Lama visited Odisha, the Tibetan Settlement. In 1965, it was again performed during the visit of Kyabje Dudjom Rinpoche. He appreciated the performers and advised them of Lingdro’s significance and richness in blessings, power and benefits. It was performed again in 1970 for His Holiness the Dalai Lama when he visited Odisha once again. His Holiness was very happy and impressed. 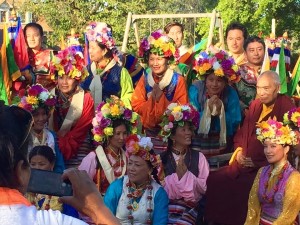 During this time in Odisha, Kyabje Terton Namkha Drimed Rabjam Rinpoche was very inspired by the Lingdro performances. Rinpoche, being a reincarnation of King Gesar’s elder brother Gyatsa Shalkar, repeatedly saw visions of King Gesar of Ling and clearly remembered his former life. According to Rinpoche’s long-term vision, he emphasized the importance of Lingdro dance and its beneficial power to pacify adversaries, disease, famine, war and destruction. According to Rinpoche’s wishes, a Lingdro training began at Camp 4 in Phuntsokling, the Tibetan Settlement. The Ripa lineage has helped preserve the lineage of Lingdro dance, especially through Kyabje Terton Namkha Drimed Rabjam Rinpoche’s Gesar mind-treasures, which encompass the aspects of Gesar as a Guru, a Yidam and as a protector. The Ripa lineage and Lingdro dance are being supported and guided by the Ripa family and the Lingdro Association. Lingdro dance has been performed in many different countries throughout the world since 1973. A recent highlight was the Lingdro performance in 2014, which occurred on the 25th anniversary of Ngagyur Nyingma Monlam, the great prayer for world peace in Bodhgaya, India. Since 2003, this sacred tradition of Lingdro has grown under the support and leadership of Dungsey Karma Shedrub Rinpoche (brother of Terton Namkha Drimed Rabjam Rinpoche).

Unlike other dance performances, Lingdro is a ritual dance containing 15 chapters of Dharma terms with poetic style, that invoke the deity King Gesar of Ling, and which bestow blessings, strength, energy and courage. The benefits of the Lingdro dance are the pacifying all of the negative influences of the time, place and to gain peace and prosperity. It is being performed to ensure that it will bring auspiciousness to all countries of the world, increasing peace and happiness within the minds of all humanity. It is an indispensable component of the many Sadhana practices bestowed by the enlightened warrior, King Gesar of Ling.