In 1976, the renowned Tibetan lama and meditation master, Namkha Drimed Rabjam Rinpoche, stayed in retreat at the Asura Cave in Pharping, Nepal – one of the most sacred “power places” in the Tibetan Buddhist tradition. The visions that he experienced at this pilgrimage site on the edges of the Kathmandu Valley led to the founding of The New Treasures Project and Rigon Tashi Choeling Nepal Monastery which is situated amidst Pharping’s lush, forested hills. 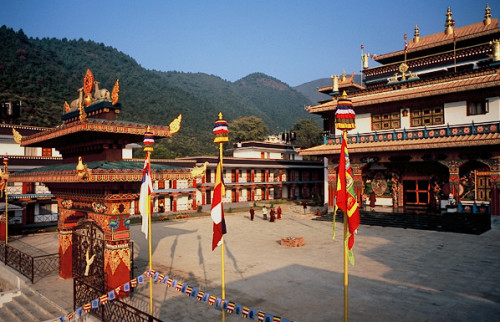 The area of Pharping is as sacred to practitioners of Vajrayana Buddhism as Bodhgaya is to Buddhism as a whole, for it was here that Padmasambhava, the 8th century Tantric sage, achieved enlightenment. For centuries Pharping has been a center for spiritual practice and, besides the two caves where Padmasambhava and his consort Shakyadevi meditated, the area boasts many monasteries, temples, and residences of revered Tibetan masters. The rocks surrounding the caves continue to manifest an extraordinary phenomenon called rangjung, in which sacred forms arise spontaneously from the living rock due to the intensity of spiritual energy that pervades this area. The site for the monastery is situated below high forested hills which are held to be mystically formed in the shape of the Eight Auspicious Symbols highly regarded among Tibetan Buddhists. 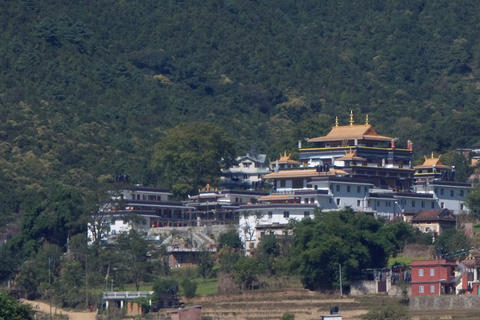 In November of 2005, after 6 years of construction, the Rigon Tashi Choeling Monastery was completed and officially opened. The consecration of this monastery took place, at a time when one thousand two hundred fifty four years have passed since the Abbot (Shantarakshita), the Master (Padmasambhava), and the Dharma King (Trisong Detsen), met in Tibet and the great monastery of Samye was built, and three hundred fifty years have passed since Terchen Taksham Nuden Dorje appeared as the protector of the teachings and beings. The consecration took place in the 17th Rabjung cycle, in the Wood Bird Year on the occasion of the Lhabab Duchen, which marks the return of Shakyamuni Buddha to this world after traveling to heaven to give teachings to his mother. This great festival was celebrated on the tenth day of the ninth month, during the waxing moon, which was on the 11th of November 2005, according to the Western calendar. Many great Lamas headed by the holder of the life-force of the Nyingma School, His holiness Penor Rinpoche were in attendance. The protector of the dharma wheel, Kyabje Namkha Drimed Rabjam Rinpoche, in the midst of the gathering of an ocean of lamas, tulkus, masters, and the sangha together with disciples and benefactors, performed the consecration according to the ritual of the Beautiful Garland of Flowers, a ritual manual from Lama Yishin Norbu of the Taksham Treasures, so that the virtue of this auspicious and excellent occasion may be the cause for the teachings to abide and spread in this world for a long time. 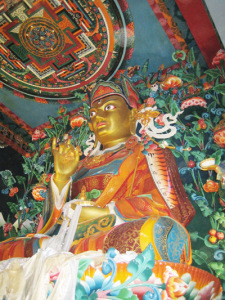 The Monastery temple is four stories in height, 90 feet in length, 70 feet in width and constructed in an excellent shape. The main image in the assembly hall is a two-story statue of Buddha Shakyamuhni made from medicinal clay surrounded by the two Supreme Disciples, the Six Ornaments and the Seven Universal Buddhas. To the right is the statue of Guru Rinpoche constructed according to the Taksham Lama Norbu tradition and surrounded by the two Dakinis and the Eight Manifestations. To the left of the main image is Eleven-face and thousand-armed Avalokiteshvara surrounded by the two bodhisattvas. In the right alcove there is Guru Dorje Drolo and in the left alcove is Palchen Tamdrin (Hayagriva) with consort. On the walls are paintings of the Twelve Dzogchen Teachers, the Taksham lineage masters, all of the main deities of the three roots according to the Gathering of the Intentions of all Yidams (Yidam Gongdu), the Wrathful Guru, the peaceful and wrathful emanations of the Guru, Sengdongma Dudul Dragmo, Guru Silnon together with a small retinue, and the male and female dharma protectors. Outside are the Four Great guardian Kings. 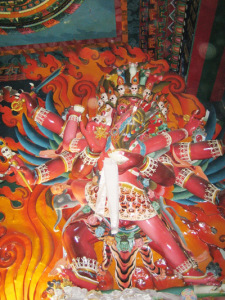 On the middle floor, in the Gesar Temple, the main image is a statue made of medicinal clay of Palchen Dorje Shonu (Vajrakilaya) with consort. To the right are, in order, the Gesar of the three roots and the Gesar of the Four Activities, according to the iconography from the Secret Treasure of the Three Families, a mind terma of Namkha Drimed Rabjam Rinpoche, and an image of Gesar Dorje Tsegyal, from the mind treasures of both Jamgon Mipham Rinpoche and Lharig Dechen Rolpa Tsal. Also, there are images of Gesar’s heroic companions led by Phuwo Gyatsa Shelkar. On the walls are primarily images of the three roots from the Tersar, among them scenes from the life story of King Gesar of Ling, annihilating hosts of demons. 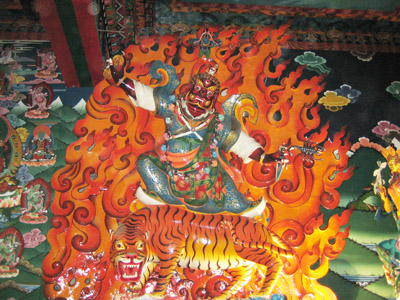 In the temple on the upper floor there are images of Samantabhadra with consort, Amitabha, Vajrasattva, the Medicine Buddha, and Amitayus. All of the images are excellently constructed with the six medicinal substances and filled according to the tradition of Minling Lochen Choepel Gyatso, with the four types of relics, dharani, and life pillars. Important sacred substances from Ripa Labrang and other places, earth, water and wealth-bringing substances, treasure vases of the yaksha wealth gods, and so forth have been properly placed therein.

In the surrounding areas there are the monks’ quarters and monastic assembly hall, a common kitchen, bathrooms and showers, a garden and park, all surrounded by a fence. This has all been excellently constructed in the past five years without any untoward incidence incurred to exterior or interior. 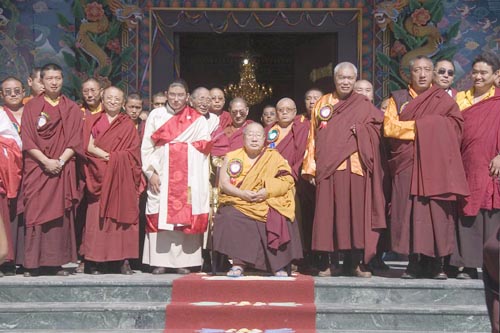