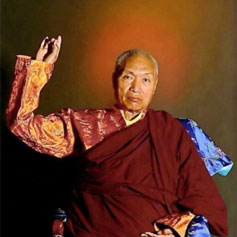 His Eminence Namkha Drimed Rinpoche is the supreme head of the Ripa lineage of Nyingma Vajrayana Buddhism and a living Tertön. The Ripa Lineage has its historical roots in the supreme head, Glorious Master Ripa Pema Deje Rolpa, the leader of both the family and dharma lineages of Rigon Tashi Choeling Monastery.

His Eminence was born in 1939 to his father Ripa Jigme Tsewang Chokdup (the 3rd Ripa Lineage Holder) and his mother Mayum Palden Tsomo, one of the great grand daughters of Drubwang Shakya Shri. Drubwang Shakya Shri’s son and spiritual heir Dungsey Phakchok Dorje recognized him as being the rebirth of the master and visionary saint Terton Yongey Mingyur Dorje (1628/41-1708) and gave him the Candali long-life empowerment and named him Namkha Drimed Rabjam.

With future circumstances of Tibet clearly set forth in prophecy; in 1958, His Eminence, together with his retinue of attendants and disciples, escorted by Dharma protectors, traveled safely through the hidden land of Pemako and eventually settled at the Phuntsok Ling Tibetan Settlement in Orissa. In order to preserve the tradition of the Ripa Lineage, and the Profound Treasure Teachings of the great Tertön Taksham Nuden Dorje, together with is elder brother, Drubwang Adzin Rinpoche; he founded a temple in the 1970’s for the benefit of the Sangha, and the restoration of Tibet’s rich spiritual heritage in exile, India. The new Temple was inaugurated by His Holiness the Dalai Lama and given the name Rigon Thubten Mindroling.

The practices of the Ripa lineage are based on Taksham Samten Lingpa’s vast Terma cycle of revealed teachings which also includes the most elaborate account of the life of Yeshe Tsogyal (Note, the Taksham teachings come from a time prior to Pema Deje Rolpa and are a Nyingma Cycle of teachings originating from Yeshe Tsogyal and her primary consort Arya Sale). Rinpoche is also the revealer of the complete cycle of teachings on the life of Gesar of Ling, the enlightened warrior-king of Tibet.   As a sublime incarnate master who ranks among the highest masters of awareness, His Eminence Namkha Drimed Rabjam Rinpoche continuously bestows ripening empowerments, liberating teachings and spiritual advice to countless beings that are to be guided in these ways.   His continual efforts to secure the Buddha dharma permeate his compassionate Dharma Projects for the Tibetan refuge communities as well as to the building of Ripa monasteries in India, Tibet and Nepal. His unceasing efforts to carry out enlightened activities in any way that will guide beings thus ensures that a rain of benefit and well-being, in both the short term and the long term, will fall in a vast range of realms, establishing beings in the state of liberation.

His Eminence is a brilliant teacher, a practitioner, a master of profound hidden Treasure-teachings (Terma), deeply immersed in the lineage of formal practice and realization. His followers throughout the world hold him in high esteem for his supreme realization, his wisdom, and for the power of his practices for healing, divination, and the pacification of obstacles.