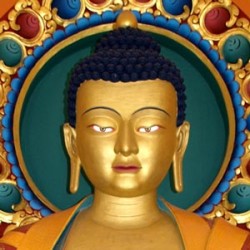 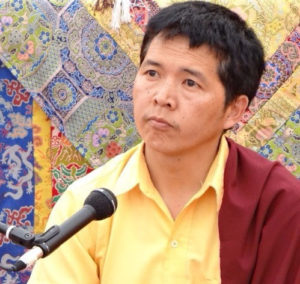 Lama Tenzin Phuntsok was born in 1970 in Orissa, (India). When he was 14 years old he was admitted to Rigon Thupten Mindolling monastery, where he spent twenty full years. In the beginning, under the kind and inspiring guidance of H.E. Azin Rinpoche, he practiced intensively for several periods, finishing both the brief and extensive Ngondro of the Taksham tradition. Afterwards he participated in the pujas and drubchens held in the monastery, being trained and serving for some years as a chöpon and then as an umze. In 2004 Lama Tenzin was sent to  Rigon Tashi Chöling monastery in Nepal, to work as editor of the Ripa Arya Palo Edition Committee, staying there until 2012. His most joyful and valuable time was when he worked as coordinator of the chöpon team during the Great Rinchen Terzö Empowerments, bestowed by H.E. Namkha Drimed Rabjam Rinpoche in Orissa, in 2009.