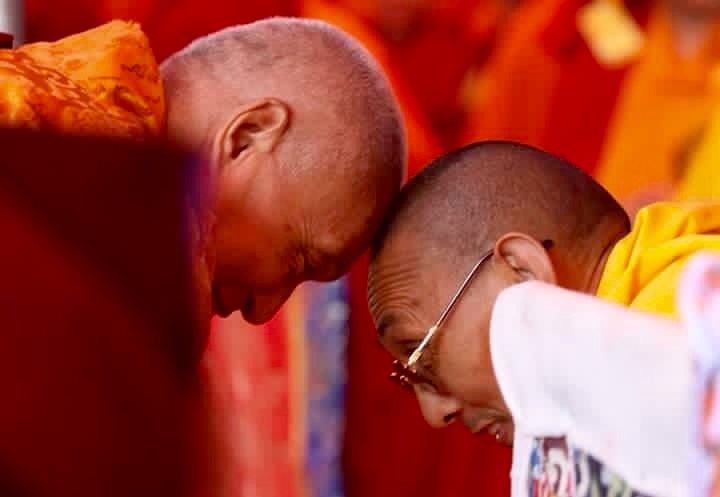 Gongter Empowerments by Namkha Drimed Rinpoche continue in Nepal, including empowerments for the practices of Gesar of Ling. 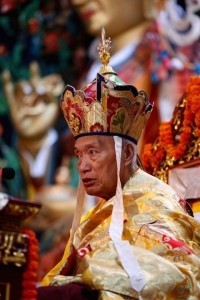 The assembly at the Gongter has now received the first five days of empowerments from His Eminence Namkha Drimed Rinpoche. Each day seems to bring a few more people to the Rigon Tashi Choeling Monastery, and the crowd under the massive tent in the courtyard outside main shrine room grows larger. Throughout the first five days of empowerments we had sunny weather, but on the evening after the last abhisheka, we were showered with an immense, monsoon-like rain, which seemed to herald the coming transition from the first group of empowerments, which were Terma of root practices on the tantric path, to the second group of empowerments, which are for the practices of Gesar of Ling.

His Eminence is most famous for his revealed Terma teachings and practices of Gesar, the enlightened warrior-king of Tibet. Gesar’s life story resounds with wisdom expressing the depth of the Buddhist teachings while also showing the core values of Tibetan culture, the journey of the realized ruler who awakens the world while subjugating negativity, and the dynamic nature of an enlightened kingdom in full manifestation. However, Gesar’s activity arose in dependence upon the tantric tradition of the Nyingma, the earliest transmission of Buddhism in Tibet, and the first Terma empowerments of the Gongter were all vitalizations of that essential tradition.

The Nyingma, or ancient teaching lineage, gave birth to the Terma tradition as a result of the foresight and compassion of Padmasambhava, the enlightened Indian master considered to be the Buddha of the Tantra teachings in the way that Shakyamuni is seen to be the Buddha of the sutra teachings. The sutra teachings are exemplified most clearly in the discipline of a monastic—the ultimate example for a monastic being Shakyamuni himself. The tantric teachings are exemplified most clearly in the life of Padmasambhava, who was invited to Tibet in the 8th century by King Trisong Detsen to help firmly establish the Sutra and Tantra teachings in what was then an untamed land. Padmasambhava was not a life-long monastic, but manifested in myriad ways, as a monk, a king, a wandering yogi and a fierce and uncompromising wrathful teacher. 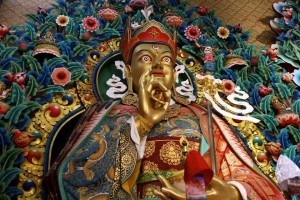 Padmasambhava’s life story essentially demonstrates mind’s ability and strength to manifest in whatever ways are necessary to awaken beings to their natural wisdom and compassion. Meditation practices of Padmasambhava allow people to connect with the inspiration and blessings of Padmasambhava’s mind, the mind of the ultimate teacher. Fittingly, the Gongter’s first empowerment was for Padmasambhava in his manifestation of the teacher in a peaceful form.

The schedule for the opening of the Gongter was spacious, with just one empowerment per day. An empowerment (Skt. abhisheka, Tib. wang) is a ritual display of all aspects of the path to complete enlightenment from the perspective of a single style of Vajrayana practice. In an empowerment of Padmasambhava, for example, the teacher gradually introduces students to the essence of Padmasambhava’s mind through progressively more subtle imagery and instructions, all oriented toward enabling the student to relax into particular manifestations, or principles, of their natural compassionate mind and basic goodness. In the first empowerment of the Gongter, the monastery was permeated with the feeling, blessings and inspiration of Padmasambhava. 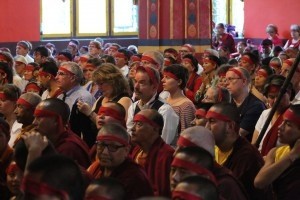 After the first day, the empowerments of the Gongter moved to the afternoons, with the lungs bestowed in the mornings. Lhuntrul Rinpoche is a fast reader, which is fortunate because His Eminence’s Terma teachings comprise 17 volumes of text, each of which are roughly 500 pages in Tibetan, which would be three times that size in English translation due to the compressed nature of the Tibetan language. It was amazing to learn that none of these 17 volumes are commentaries on Termas discovered by His Eminence. All of these volumes are actual Termas and what are called “pure visions,” where the deity appears to the teacher’s wisdom-mind in meditation, and teachings are written down from that encounter.

It is inspiring to contemplate that Namkha Drimed Rinpoche’s extraordinary wealth of visionary experience is available in this world at a time when very few Tertöns have appeared. It is also humbling to realize that His Eminence’s mind and experience is vastly different from ordinary meditators—and even most Tibetan teachers—because he is living in a world where deity and Drala are experienced directly.

The second afternoon of the Gongter was devoted to the empowerment for Padmasambhava in his wrathful form, known as Dorje Trolö. To speak of a teacher appearing wrathfully, or to do a wrathful meditation practice, means that we are meeting the part of ourselves that is capable of undoing our deepest negativity. In other words, we are developing the strength to look at the parts of ourselves we usually don’t want to work with, such as our innermost selfishness, aggression, and so forth. Iconographically, the wrathful teacher is an image of the mind that is not afraid of seeing and unraveling hatred and deep pride in order to reveal the pure goodness that is underneath. When we talk about enlightened wrath, we are talking about the most powerful fruition of fearless warriorship. 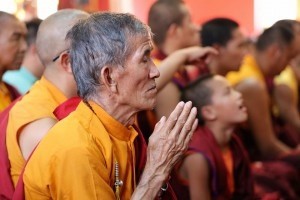 The next three days of the Gongter leading up to the Gesar empowerments were related to active manifestations of the teacher principle. The first was an empowerment for Vajrakilaya, who is a wrathful deity, or enlightened principle, related specifically to overcoming obstacles. Vajrakilaya was a key meditation practice that Padmasambhava did in Nepal during his journey to Tibet. He did this practice in order to overcome a three-year drought and plague that were overwhelming the region. Padmasambhava quelled the plague and drought, and also attained a level of realization where the physical body is transformed into pure light during his retreat on Vajrakilaya in the cave of Yangleshö, which is near Rigon Tashi Choeling Monastery.

On the next day of the Gongter, His Eminence bestowed the empowerment of Yeshe Tsogyal, who was queen of Tibet at the time of Padmasambhava’s arrival. She became his principle disciple and was the first Tibetan to attain enlightenment. Yeshe Tsogyal practice, which one might do after receiving the empowerment, is an entry into realizing enlightenment through the feminine principle of space and wisdom, taking the energy and example of Yeshe Tsogyal as the path to awakening. 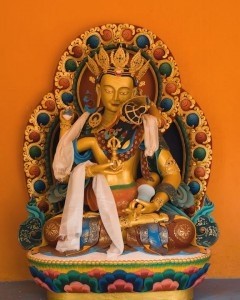 The final empowerment before the start of the Gesar abhishekas was devoted to Vajrasattva, the deity that contains all forms of deities and dralas through embodying primordial purity. The principle of purity is essential in Vajrayana practice in the same way that confidence in basic goodness is the foundation progressing forward in the Buddhist teachings and establishing an enlightened society. When we truly see that the world and ourselves are good and pure, there is no way to be anything but brave, compassionate and kind.

Walker Blaine is Master of Liturgies to Sakyong Mipham Rinpoche. He has studied extensively with the Sakyong and has been part of the Shambhala community for more than 30 years.