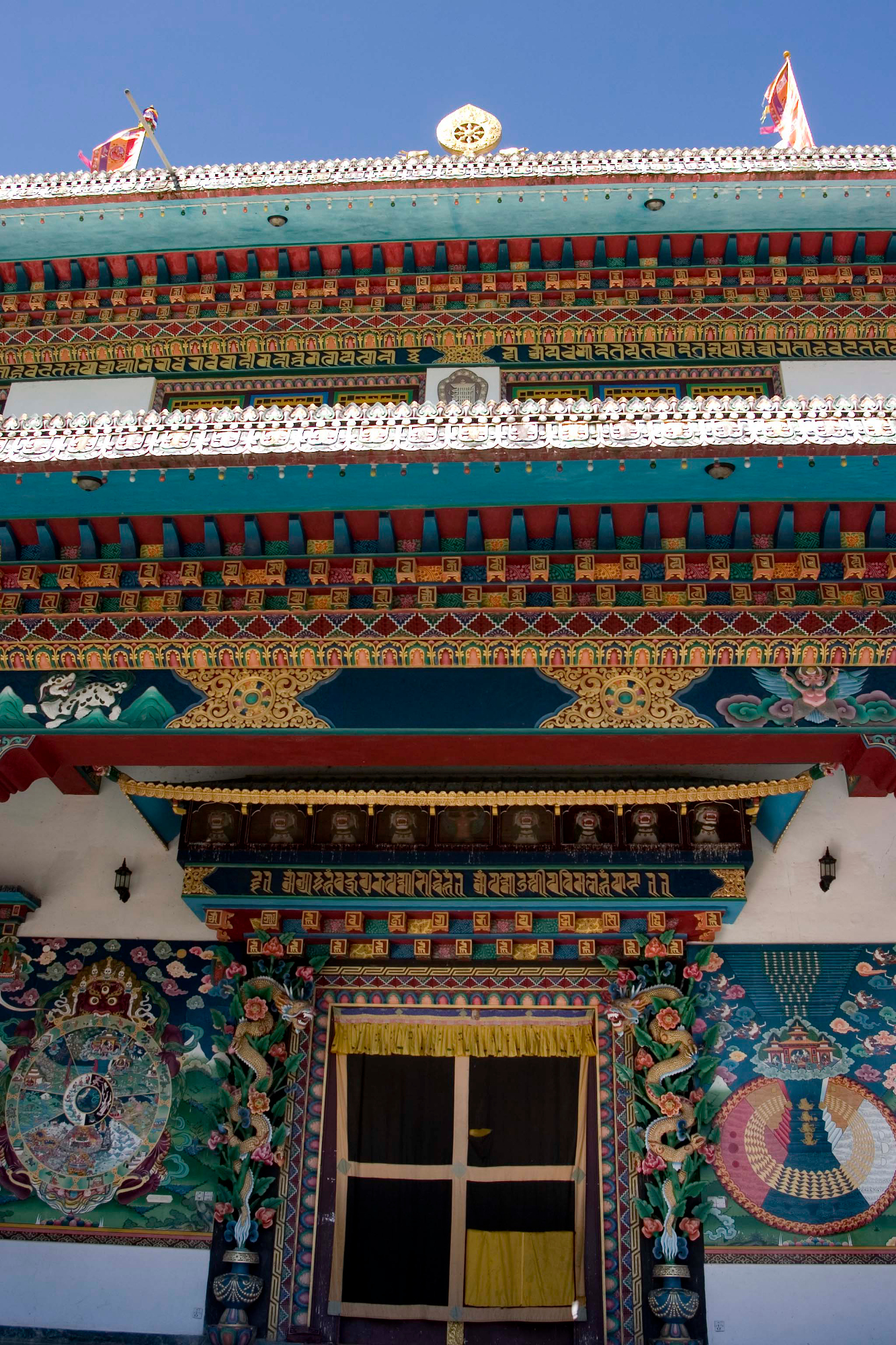 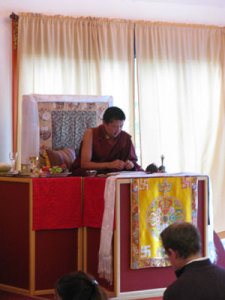 The Ripa masters are currently in Nepal starting preparation on the Karma Empowerment that will continue on for 6 weeks. They send all of us their blessings.


This story is to just recap the recent much-awaited tour of his Eminence Namkha Drimed Rinpoche and Gyetrul Jigme Rinpoche to the United States after two years. It was profound and filled with blessings and joy to all the students and the communities who have missed his pure presence last year. And it went by quickly with them bestowing teachings and blessings in New York, Vermont and Los Angeles.

New York teachings were faced with obstacles from the storm but still continued on with many blessings from the enlightened masters. The wealth Puja in purchase was a miracle in progress and all the predicted rains decided to wait till the fire puja was completed till the end of day. Namkha Rinpoche bestowed plenty of blessings to the people and the land with the enrichment gesar wealth fire offering. A very auspicious occasion attended by people despite bad weather and from afar. 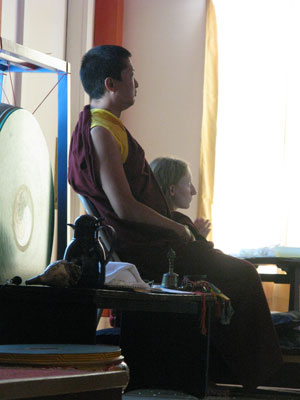 Gesar Enrichment Practice and Retreat in Vermont was lead by Namkha Rinpoche and Jigme Rinpoche. It was a rare occasion after a very long time for both the teachers to be present and send bountiful of blessings to both the Ripa and the Shambala communities. The retreat was extremely profound and greatly joyous.

A healing ceremony then followed in Los Angeles. Very many people came to receive healing blessings from his Eminence.

A four-day taksham yeshe tsogyal retreat was held at Ari Bhod. This is the first time after the parinirvana of Lama Gyatso that his Eminence went back to the land and the experience was one of a kind…

Carl Castro shares with us his personal story… 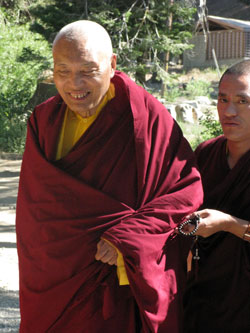 I had very much wanted to see His Eminence Namkha Drimed Rabjam Rinpoche on this year’s visit, as I had not seen him for two years, and missed him a lot.

Further, as a member of the Shambhala community, and a student of both the first Sakyong Chogyam Trungpa Rinpoche and the second Sakyong Mipham Rinpoche, His Eminence’s visit would provide an opportunity for me to reaffirm my vow and connection not only with His Eminence and the combined family lineage of these great teachers, but also with the originators of our shared lineages, Lord Padmasambhava & Lady Yeshe Tsogyal, and King Gesar.

This visit would mark the ninth time His Eminence had given the Yeshe Tsogyal empowerment, which Lama Gyatso had requested become an annual event, for the Ari Bhod sangha.  This empowerment – together with one of the most extensive spiritual biographies or namtar of Lady Yeshe Tsogyal – are from the Takshamterma, held in the Ripa family lineage since the time of Ripa Pema Deje Rolpa, an emanation of Lady Yeshe Tsogyal’s consort Arya Sale and the speech emanation of Taksham Samten Lingpa.  Last year, His Eminence did not tour North America.  This year, the retreat at Pema Drawa – Ari Bhod’s retreat center near Tehachapi, California – would be made especially poignant with the absence of the physical manifestation of Lama Gyatso, who entered parinirvana two years ago, just a few months after His Eminence’s last visit.

Seeing His Eminence was wonderful, and His Eminence’s empowerments and teachings were, of course, profound and amazing.  It is difficult to write about this without merely stringing together superlatives, but it is something that I’m sure all the readers of this newsletter carry in their hearts.  It was also very good to see Semo Pema Dechen, one of His Eminence’s four daughters, who exemplify family Dharma lineage in their support of their father and who seem to be essential in summoning his teaching.  Many of us were fortunate to have a private audience with His Eminence, and, even though I really had nothing to say in mine, I was very grateful for it.  With this, with the Yeshe Tsogyal Empowerment, and especially with His Eminence’s added gift of the Gesar Enrichment Empowerment following, I felt that all my aspirations for attending the retreat were very beautifully and surprisingly effortlessly fulfilled.

In addition to the teacher and the teachings, the jewel of the sangha shone rather brilliantly.  It was wonderful to reconnect with old Ripa friends from the San Francisco Bay Area and from Los Angeles, and to make new friends among the Ripa and Ari Bhod sanghas, as well as other sanghas represented.  There was much conviviality during meal times and breaks, sitting together, chatting, and enjoying the natural scenery of Tehachapi Mountain, and during walks to and from cabins and tents, especially at night, sharing amazement at the multitude of stars visible from that remote elevation, and sometimes also sharing a flashlight.

Throughout the retreat, the same Ari Bhod sangha who were responsible for supporting the teachings and empowerments, as well as serving His Eminence, also served the participants from other sanghas as hosts. We were all beneficiaries of their generosity and exertion, which were extended with an engaging, down-to-earth friendliness. The retreat ran smoothly, and the food provided by their kitchen was delicious, some of the best I’d ever had on retreat.

Several times during his teachings, and especially in concluding, His Eminence extended praise to the Ari Bhod sangha, the students of Lama Gyatso, for holding such devotion to their lama and for carrying out his wishes with such dedication and hard work.  It was impressive, I believe to all of us, how they have carried on since Lama Gyatso’s parinirvana.  Personally, I was even further amazed by their mastery of Vajrayana ritual and by the example of their practice, creating an atmosphere suffused with openness and devotion.  Adding to this was the usual great devotion and cheerfulness of the dedicated Ripa sangha, and that of many other participants with special connection to His Eminence.

Within this atmosphere, what His Eminence gave during his empowerments and teachings seemed exceptional, even for His Eminence and even for these profound topics.  The Yeshe Tsogyal ceremony was very full of both presence and ritual occasioning it, with, I believe, eight empowerments in total, for five aspects and three levels.  The Gesar Enrichment ceremony was truly powerful, and, well, quite unbelievably rich.  It felt as though His Eminence were giving everything, as fully as possible, honoring both his commitment to Lama Gyatso and the devotion of Lama’s students, as well as the continuing dedication of the visiting Ripa sangha.

Several of us were able to stay another day after the retreat ended, to say goodbye to His Eminence upon his departure.  We received the added blessing of following His Eminence on a tour of the astoundingly beautiful and detailed three-dimensional models of the Zangdok Palri and Shi Tro mandalas being constructed under the direction of Ari Bhod’s renowned resident artist lamas.   Still, when it came time for His Eminence to leave, as we gathered to offer katas and to wave goodbye, there was the joyful sadness of parting, full of gratitude, longing, and all sorts of heartfelt emotion.  It had been a truly special time with His Eminence.

May His Eminence live long; may he enjoy the best of health and spirits, and may his Dharma activity flourish; may he visit us again soon, and may we receive and serve him well and genuinely; may we continue to receive his teachings and blessings, and may we never be separated from him.