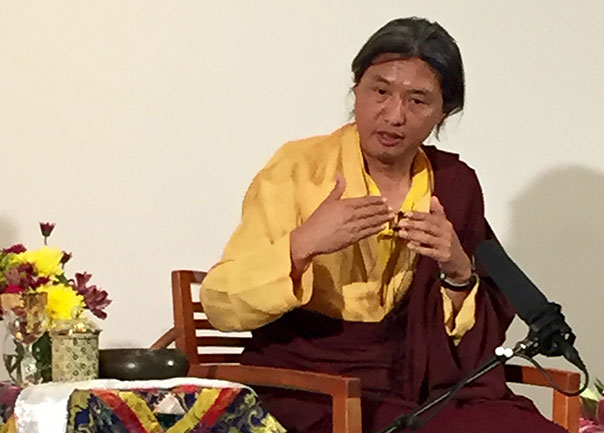 On a cloudy, warm evening, Rinpoche came to speak at the Tibet House in New York City, which shares the art, culture, heritage and systems of spiritual philosophy of Tibet with the world.

A hush fell over the room as Rinpoche entered. The audience bowed, hands clasped together in front of them, as he made his way to the stage. The President of Ripa Ladrang, Alan Goldstein, introduced Rinpoche and shared Ripa Ladrang Foundation’s new program and initiative that Rinpoche recently started, Adopt-A-Village, which is meant to help those in need after the devastating earthquakes in Nepal.

The crowd took a seat as Rinpoche began to quietly and calmly speak, sharing the wisdom he developed on his year-long solitary retreat. He spoke of how the experience of life is the best teacher, that approaching dharma is not running away from life, but embracing it, and that we are all interdependent. The wonderful and thoughtful talk moved from a lecture, to a parable on the necessity of compassionate giving, to the practice of meditation, with the latter section of the talk being focused on sharing and engaging in various levels of meditation. While the meditation was occurring, you could feel any tension being released from the room, as numerous people engaged with the tools they needed to encounter and change oneself for the better.

The talk ended with an extended question and answer session, with people sharing everything from their concerns about friends, to achieving the best techniques for meditation.

The talk slowly, quietly came to an end and as the crowd began to filter out one couldn’t help but feel that for a moment at least, they were more honest and open with themselves. For as Rinpoche said, which is particularly appropriate for those living in New York City, “We are busy, and we like to say we are busy, but yet we feel that something deep is missing, and that is why we meditate and practice.”

Thank you to everyone who helped make this event possible,
The Ripa Ladrang Team