Grand Summer Retreat for the Year of Guru Rinpoche 2016 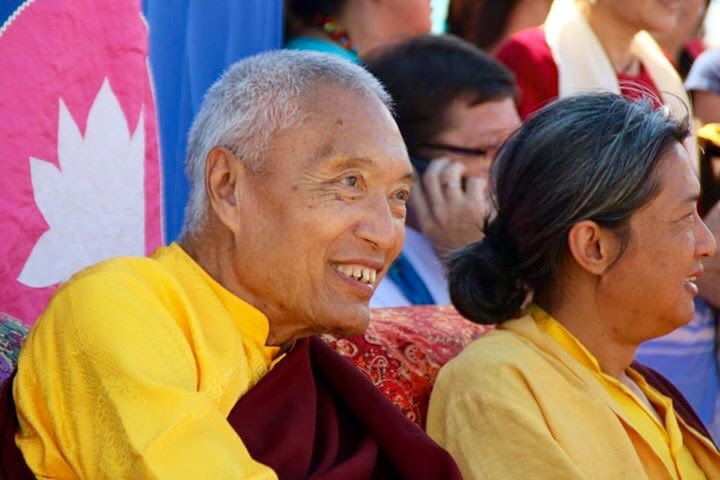 Dear Friends and Members of the Ripa Sangha,

What a special occasion, being the “Year of the Fire Monkey”, to celebrate Guru Rinpoche in his birth year. This occurs once every twelve years and was an excellent opportunity to experience three beautiful weeks in Switzerland at the RIC Center for meditation, Drupchö Yeshé Tsogyal practice and Guru Rinpoche Tsok Bum. It all ended on a beautiful day of festivities and Tibetan dances. 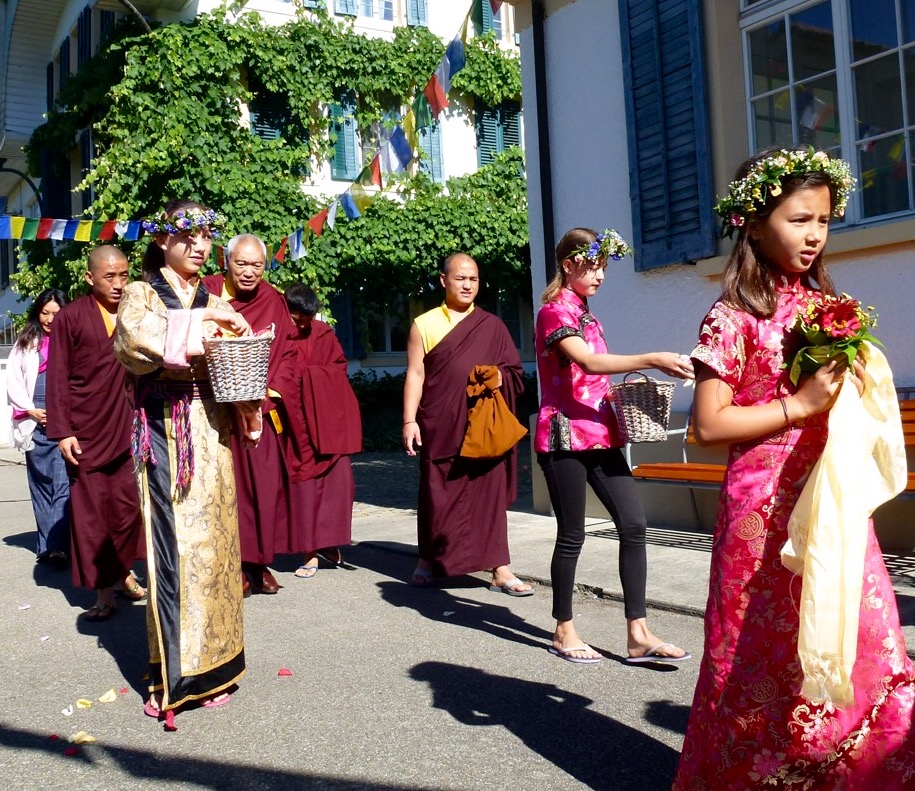 Dungsey Gyetrul Jigme Rinpoche welcomed us to the first week of meditation and teaching. In 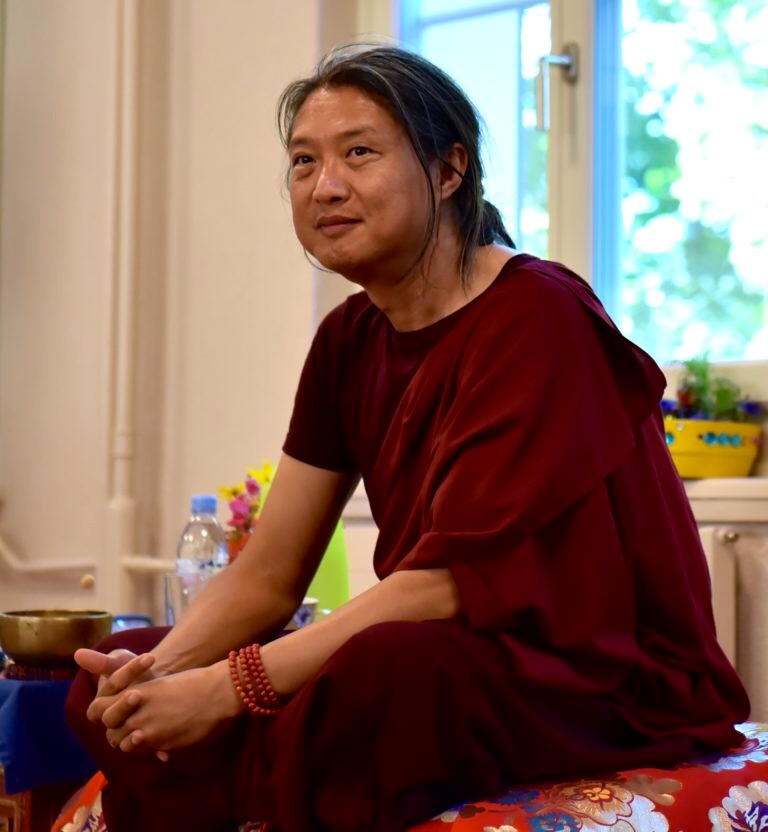 the Buddhist tradition, meditation is the basic practice and it supports what we study intellectually, it also brings forth an openness in the sense that it is free of any ritual. “It is important that we understand to what we are committed, to really understand profoundly this experience which represents most of the lessons of Buddhism and allows the discovery of oneself,” said Rinpoche. He added, “And it seems that meditation is a way to find a state of happiness. It calms the mind and it brings a certain peace, goodness and love toward ourselves as well as a warmth in our heart. When we experience this warmth, it opens a space within. The most immediate effect is that we do not feel alone. Everyone’s desire seems to be finding a state of happiness.” And so we began our journey guided by Rinpoche where he brought us in touch with ourselves, first through breathing, then by exploring our feelings, our heart and our past. By exploring our basic goodness, we learn to love ourselves…. a beautiful adventure.

Introduction to Buddhist Philosophy and Yogom®

Everyday we participated in two activities that were quite successful and in the future, will be held frequently throughout the year at the RIC. Geneviève presented Buddhist philosophy and extended the guided meditation training. A longtime student of Rinpoche, she explains, “For me, Buddhism and mindfulness or full awareness are not separate. One of the main teachings of the Buddha is training in mindfulness. A comprehensive teaching of the great sutra is establishing mindfulness. Present in all schools of Buddhism, it is the heart of all practice. This mind training not only involves a dimension of wisdom, it also involves the heart. For his part, François led us 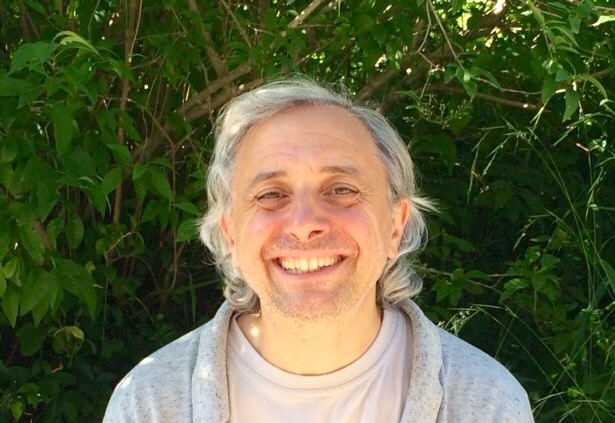 gently through Yogom® exercises. The yoga/meditation practice guides us gently and profoundly through an exploration of our body in connection with our mind. It prepares us for the guided meditations given by Rinpoche. A few years ago, Rinpoche had a vision of Yogom and asked François to create a program and practice in order to help students learn to be within their bodies when practicing. He was given the task to teach and spread Yogom® after working with Rinpoche for almost three years on developing this practice. You will not find Yogom® anywhere else. It is an exceptional practice, which was inspired by Rinpoche and Francois.

François Bertolero – Has received in-depth training in Kundalini Yoga with Yogi Bajan. He is a Professor of the French Federation of Yoga founded by Gerard Arnaud with more than five hundred hours of training. He is authorized and recognized by the American Federation to teach Hatha Yoga, Vinyasa Yoga and meditation in English speaking countries.

The Children’s Corner
When parents practice, children benefit! During Rinpoche’s teachings and meditation practice, Rita welcomed the children for a creative journey that immersed them in drawing, creating a mandala, planting a small garden for the Buddha and on the weekend a treasure hunt that led to a beautiful walk and discovery of the RIC and its surroundings. At the end of the retreat they were smiling, happy and fulfilled to greet Rinpoche, who was visibly touched and moved.

Around the Retreat at the RIC

Preparing three weeks of retreat is more than hard work. Flowers and bouquets arranged from Nadya and her team were always grandiose compositions.  They adorned our Gompa, the lunchroom and other practice rooms. The makeshift carpentry workshop outside allowed Flupke 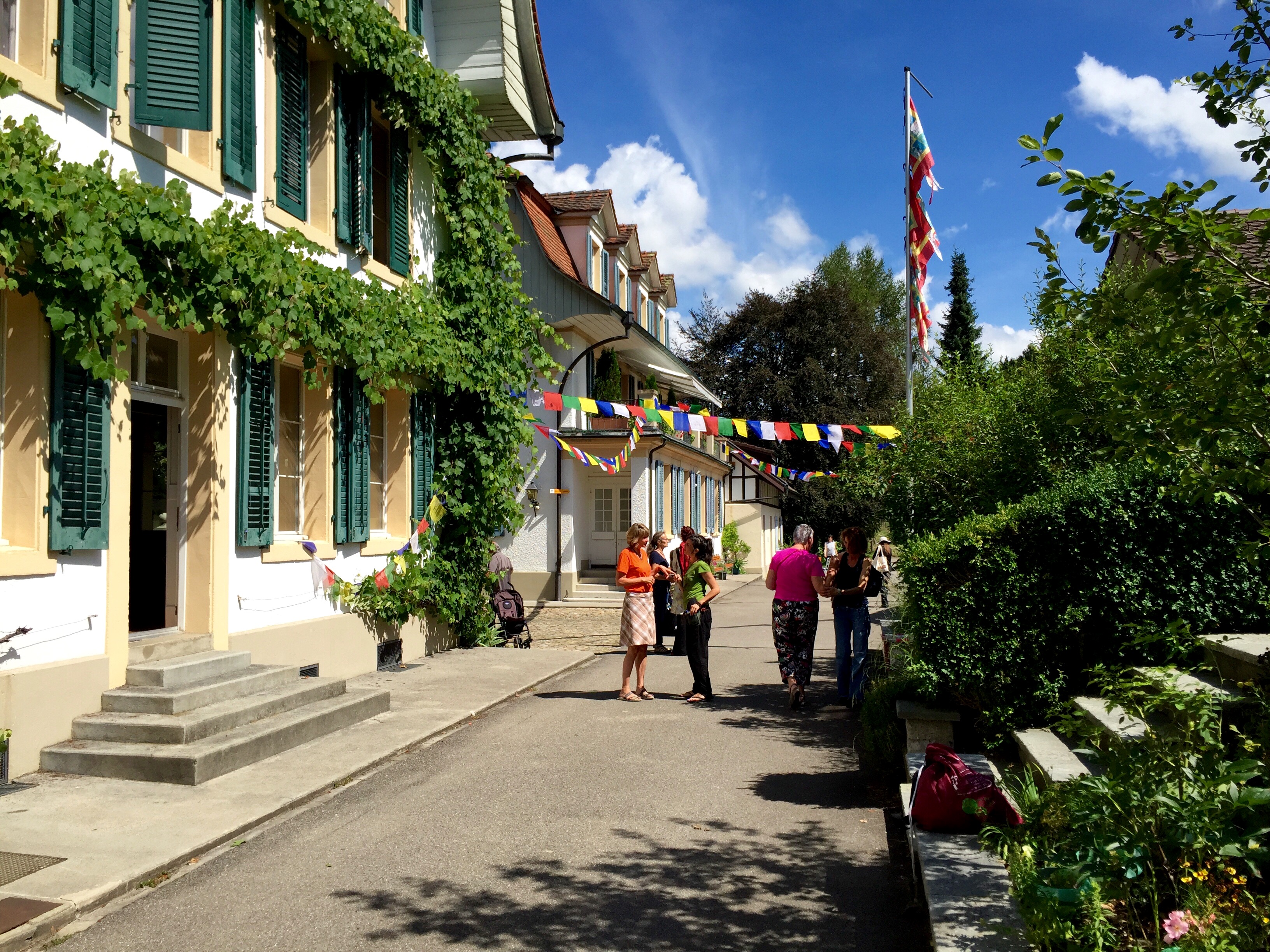 and Carlo to build practice tables, which were then painted by Irene, Carlo, Bill and Dominique and later installed in the temple. At the reception desks were Françoise, Gabriela and Dominik; the whole team helped prepare the RIC to receive the new arrivals. The chef, Patrick, whose cuisine is always appreciated, was ready on some days to feed more than two hundred and seventy people…not unexpected! The audio and sound system, which are very important to the translation and recording of the precious teachings, was set-up and managed by Laurent, who is a true master! He guarantees the quality of the recordings and the production of the CD’s. He also makes sure that participants can hear the precious teachings simultaneously translated into their language, be it German, Spanish, French or Russian.

The second week was in complete silence. Although we noticed it being broken from time to time, we recognize how “it benefits us”. On the first day we received an initiation transmitted by Dungsey Lhuntrul Dechen Gyurmey Rinpoche. On the last day Jigme Rinpoche invited us to partake in the practice of the Marme Monlam prayer with a light offering for the benefit of all beings. His words were inspiring! “We all know that we live in uncertain times surrounded by growing uncertainties, sufferings and difficulties that arise in the world. While we’re here with all of our sangha and in the presence of the Vajra Master, it is very important to remember those who have passed away as well as those who are still alive and keep them in our thoughts and in our heart. It is important to dedicate all our prayers and our aspirations to all beings who are like our mothers, so they will be free from fear, confusion and suffering; they will also be released from the experiences of the intermediate states, so they will obtain a good rebirth that will perhaps lead to enlightenment. Our dedications should also be for those who are on the path, so they exceed all sorts of obstacles, physical illness, mental doubts and insufficient positive karma. May the light of the Dharma illuminate our heart, may our Masters continue to teach throughout the world and may the Buddha’s teachings dispel the misery of the world and peace be established in the world. May we as a sangha and as a community of practitioners remain together. Let us commit ourselves in this light offering prayer. Imagine that this lamp is as vast as the universe, the oil it contains is as vast as the ocean, its flame is as high as Mount Meru, it illuminates the entire universe and leaves no room for darkness, whatever their form. Let this light never extinguish but always shine in our heart, it is our guide toward the light of enlightenment and that of all sentient beings in the world. ”

During the last week of our retreat, we first received an initiation of Guru Rinpoche transmitted 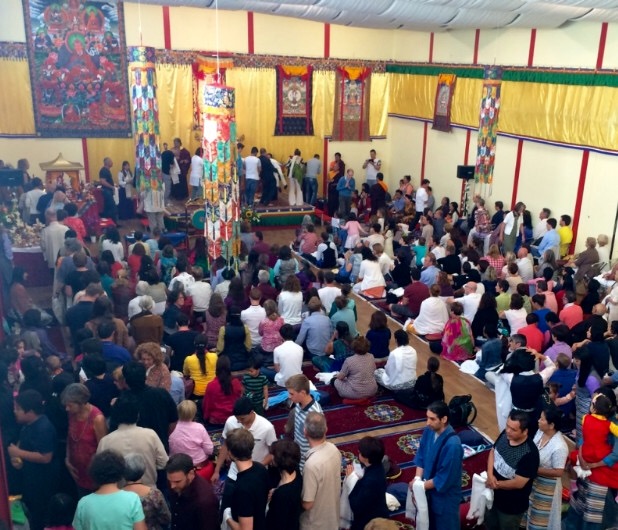 by H. E. Namkha Drimed Rabjam Rinpoche after he invited us to receive it with these words, “faith, devotion, confidence and openness of mind toward enlightenment for the benefit of all beings are very important when we receive an initiation, a transmission or when we practice. The merits and virtue accumulated will be even greater. It is this attitude that I ask of you in receiving this initiation of Guru Rinpoche”. Then we participated in the Tsok Bum. Lama Tenzin explained to us, “we are in the Year of the Fire Monkey, it is now the month of the monkey and in a few days it will also be the day of the monkey, which is the anniversary of the birth of Guru Rinpoche, an auspicious day that occurs once every twelve years. On that day, most monasteries celebrate the birth of Guru Rinpoche. That is why our Master wishes us to engage in this practice.

A Tsok Bum is 100,000 accumulations of Tsok and of reciting the Seven Line Prayer of Guru Rinpoche by a group of participants”. And finally, His Eminence revealed several practices of Guru Rinpoche from which we will accumulate. They say it is the best way to quickly receive the blessings of Body, Speech and Mind and for our stream of consciousness to be blessed by Guru Rinpoche.  After the week of collective accumulations, Jigme Rinpoche concluded by saying, “The Tsok Bum is not just reciting the text, there are also the substances which must reach a 100,000. In Sanskrit, Tsok means assembly, the collection of something. In the sense of a continuous wheel, it is the accumulation of merit (material merit and wisdom merit) and the purification of all obstacles to obtain bliss and emptiness. Tsok represents the potential merit, source of all blessings and accomplishments.” On the morning of August 13th, our last practice started at 6 am ending with a last great tsok, the sharing of a superb Guru Rinpoche birthday cake cut by Begonia and the dance to the Seven Line Prayer of Guru Rinpoche, which is a traditional dance of Orissa, presented beautifully by Chloe. 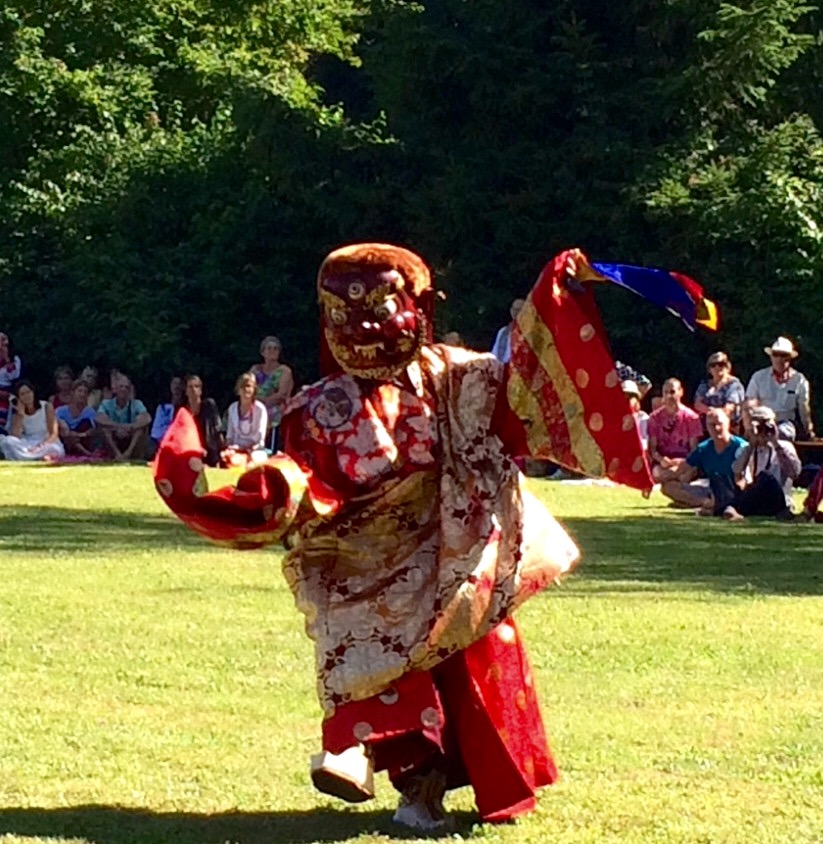 All conditions including perfect weather were met for this festival to be a success. A young troupe of Swiss-Tibetan dancers in their superb new costumes made in Nepal were well prepared and appreciated. After a powerful Dorje Drollo dance by Lhuntrul Rinpoche, was the famous Black Hat Dance. Then many of the students, having rehearsed often, presented a beautiful Dakini dance. We witnessed several dances from the Opera Lingdrö, the great epic of Gesar of Ling. Our three Masters were present and very happy too.
The photos will give you an idea of the retreat’s celebrations, atmosphere and the beauty of our Centre.

Yours Sincerely in the Dharma,
The Entire RIC Team!