Grand Conclusion of the Gongter 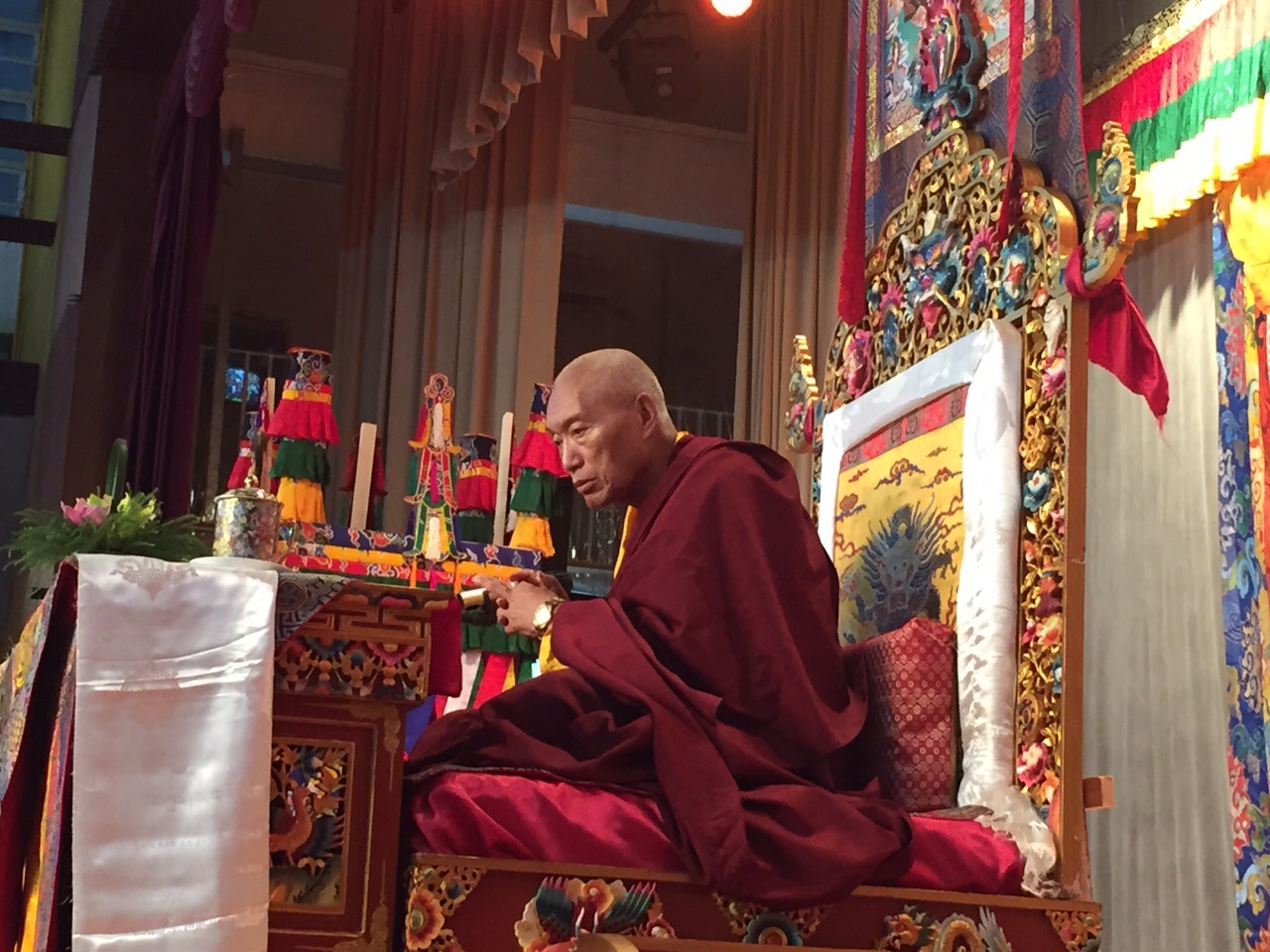 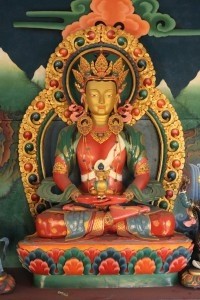 The final day of the Gongter was one of forward vision and celebration. The conclusion of the reading transmissions and thanksgiving to Lhuntrul Rinpoche happened the day before, and the final empowerment occurred in the morning. The Gongter finished auspiciously with an abhisheka of Amitayus, the Buddha associated with long-life. It was wonderful to learn that His Eminence’s Terma revelations included an Amitayus empowerment and that everyone would be able to receive it. Amitayus helps to awaken and nurture the student’s inner vitality, virtue, strength and wisdom. 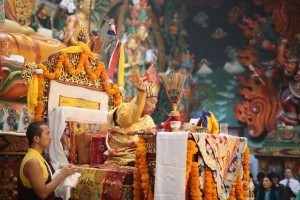 An extended series of empowerments like the Gongter is often concluded auspiciously with an abhisheka of Amitayus. This grants the student inspiration and blessings for realizing the teachings in this lifetime because a long and healthy life is extremely helpful to practicing the teachings and manifesting compassion in the world. With the prayers and ceremonies for the longevity of His Eminence happening throughout the Gongter, to have His Eminence conclude with a ceremony of long-life for the students was yet another expression of the power and circular generosity exemplified in the tantric tradition. After the empowerment, several successive tenshuks were offered to His Eminence. Exceptionally amazing statues, icons and a large golden stupa were offered to Namkha Drimed Rinpoche during this final expression of devotion and aspiration for his continued teaching and activity. The line of monastics holding offerings from the monastery itself extended out of the shrine room. It was clear that His Eminence is the life-force of the Ripa lineage. Everyone was aware of how precious his presence and teachings—particularly those on Gesar—are to the world at this time. 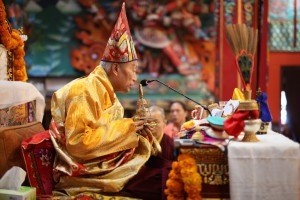 It was moving and edifying to witness the Ripa family’s involvement in the Gongter, and especially at its conclusion. Terma lineages can spread far and wide, but the heart of most of them is held by a close family bloodline. This is in part because Terma lineages are rarely discovered by celibate monastics, and in part because there is a special blessing that results from a direct genetic connection with the Tertön. 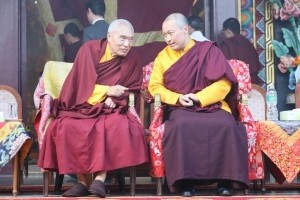 His Eminence and the Sakyong

For example, Sakyong Mipham Rinpoche is regarded as the body, speech and mind heir or emanation of the first Sakyong, Chögyam Trungpa Rinpoche. With His Eminence’s teachings so freshly arriving in this world, it was poignant to witness two generations of his family gathering to receive and maintain them with this same spirit of connection and dedication. Gyetrul Jigme Rinpoche, the eldest of the next generation of His Eminence’s family outside of Tibet, seemed to exude a deep awareness of attention, responsibility and devotion as His Eminence’s main Terdak, or Terma-lineage holder. Lhuntrul Rinpoche, who bestowed the reading transmissions, was equally one-pointed in his attention to the task of giving the transmissions in a completely pure offering of his father’s power of speech and enlightened heart. All the Ripa family manifested a palpably deep expression of devotion while receiving the Gongter. 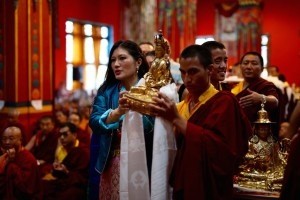 The final tenshuk was preceded by an eminent teacher at the monastery reading aloud a massive praise of His Eminence, which recounted the lineage from many perspectives until the present moment, along with making vast aspirations. In accordance with tradition, the reading was brought forth as a scroll that was many meters long. When it was finally finished, the offerings were presented to His Eminence as the many other smaller tenshuks followed one after another. Then, the entire gathering—all 2,000 of us—were able join in line to present our own offerings to His Eminence and the other teachers at the Gongter. The teachers all sat in a row that began after passing His Eminence’s shrine. It was the final time to gaze in the eyes of the teachers and receive blessings from each one as they held the different icons from the Amitayus empowerments. At the end of the row, some monastics gave each of us a bag of biscuits, fruit and candy, a take-home style offering of the final feast to participants in an extraordinarily well-attended blessing. 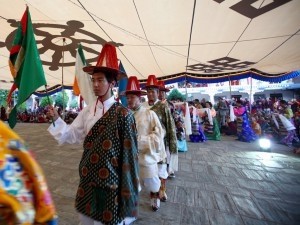 The plan had been to serve lunch after the empowerment, and then have the final celebration of the Gongter, the Lingdro Dances of Gesar, in the early afternoon. As it turned out, 2,000 people take a long time to walk through a blessing line, and the dances were pushed back to much later in the day. The Lingdro Dances are one of the great treasures to emerge from Tibet into the wider world. They recount the deeds of Gesar and invoke his presence in song and dance. Unlike monastic dance, which is performed by only one gender, the Gesar dances are performed by men and women together. 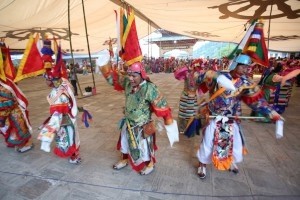 To see the dances in full regalia, performed by many of the senior dancers in the Ripa community, at a time of great celebration of His Eminence’s activity and teachings, was a tremendous final blessing for everyone at the Gongter. There could be no more fitting conclusion to the Gongter than seeing beautiful women wearing colorful brocades and flower-crowns, and heroic men wearing armor with banners flying from their helmets, all singing about the deeds and power of Gesar and his retinue of warrior lords and ladies. After receiving the protection of the Amitayus empowerment, it was a great wonder to see the Lingdro, about which it is said that seeing it can save one from rebirth in unfortunate circumstances, and a memory of it can even liberate someone from the after-death state. 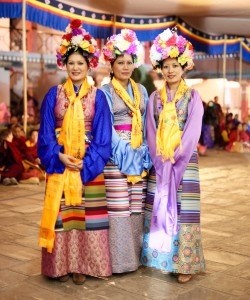 His Eminence, Sakyong Mipham Rinpoche, Jigme Rinpoche, and Lhuntrul Rinpoche watched the Lingdro from the porch of the monastery, while it was performed in the canopied courtyard surrounded by all who attended the Gongter, who were joined by many local children and villagers. The Gesar dances were interspersed with local cultural dances, such as dances and songs from Yolmo, a famous retreat place a few days walk into the mountains from Kathmandu. 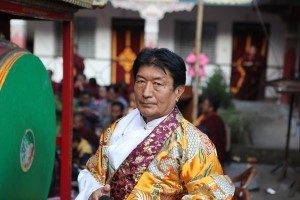 This gave the Lingdro performers time to change costumes and also a little rest between the dances, which can be quite strenuous—especially because the dancers must sing at the same time. Among the many dancers of Gesar could be seen members of the Ripa family, including the Sakyong Wangmo and her sisters, Semo Pede, Semo Sonam, and Semo Palmo, and His Eminence’s brothers Tulku Karma Shedrup, who led the singing, and Tulku Samten. 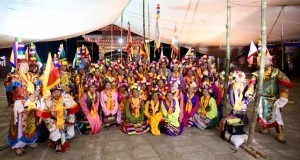 The Gesar Dancers after the Lingdro

The Lingdro was a wondrous conclusion to the Gongter, a final flourish of lineage energy that satisfied everyone, young and old, with poignant dignity. The dances continued long after sundown, and because the Gongter’s conclusion coincided with a festival time in the Kathmandu Valley, sounds of celebration echoed not just from the monastery, but from all over the hills of Pharping, late into the night. The blessings of Gesar seemed to permeate the entire region with the incense of joy and the songs of celebration.

Walker Blaine is Master of Liturgies to Sakyong Mipham Rinpoche. He has studied extensively with the Sakyong and been part of the Shambhala community for more that 30 years.