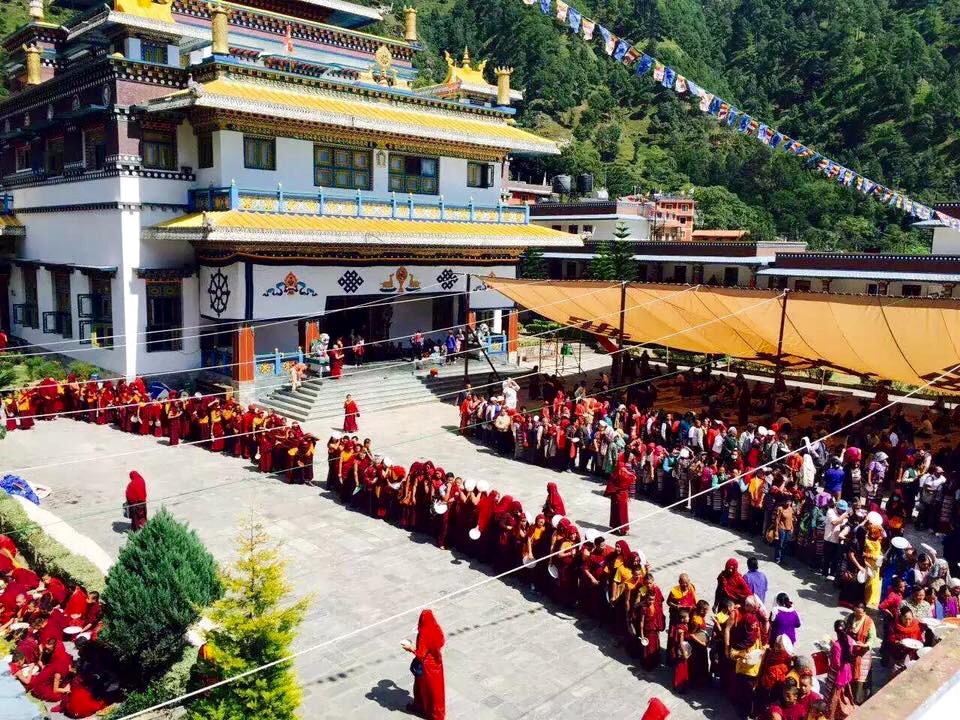 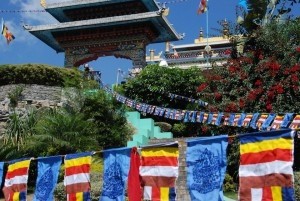 Greetings to all Shambhala and Ripa sangha from Pharping, Nepal! The Gongter Empowerments of His Eminence Namkha Drimed Rabjam Rinpoche are now underway. There are well over a thousand people gathered at Rigon Tashi Choeling monastery, which is nestled on one of the powerful, forested ridges neighboring the Asura Cave of Padmasambhava. This area is home to many monasteries and is sacred to both Buddhists and Hindus alike. The region is so blessed that one day of practice here is said to be as powerful as 100 days of practice anywhere else.His Eminence arrived on October 6th, the day before the empowerments commenced. Travelling with him from the Ripa Ladrang in Kathmandu were the Kongma Sakyong Jamgön Mipham Rinpoche, the Sakyong Wangmo, and their three children, Jetsun Drukmo, Jetsun Yudra, and Jetsun Dzedron as well as most of the extended Ripa family. His Eminence and their Majesties were greeted by Gyetrul Jigme Rinpoche and Dungsey Lhuntrul Rinpoche, along with a vast entourage of monks, nuns, and lay people who had already gathered for the event. 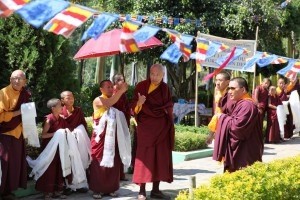 The teachers’ cars arrived in the monastery’s lower courtyard and were welcomed in the traditional fashion with a long line of maroon-robed monastics holding white khatas to show purity and devotion. Tibetan horns sounded the arrival of sacred presence in the valley. Students from all over the world followed the procession up the long stairs to the main courtyard. A vast number of Namkha Drimed Rinpoche’s heart-disciples have arrived for this auspicious event, the first time that all of his mind treasures, or Gongter, have been bestowed in their entirety. After cheerfully waving to everyone while walking to the main monastery itself, His Eminence together with the Sakyong and Sakyong Wangmo ascended to Namkha Drimed Rinpoche’s residence above the main shrine room. There they warmly greeted all who have arrived to participate in this event. First came members of the extended Ripa family, which includes His Eminence’s wife Khandro Chime Drolkar, his brothers Tulku Karma Shedrup and Tulku Ogla, and his Eminence’s daughters Semo Palmo, along with her husband Alan Goldstein and their family, Semo Pede, Semo Sonam, and Lhuntrul Rinpoche’s wife Khandro Chime, and their two young daughters and two-month old son. It has been delightful to see such a large family group and so many grandchildren surrounding His Eminence. It is an auspicious and poignant time in many ways. 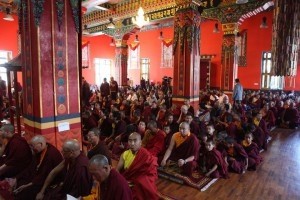 After being welcomed by a tea and rice ceremony, His Eminence and the Sakyong personally greeted everyone else at the event. A great many rinpoches, lamas and khenpos have travelled here to receive the Gongter. Besides the many monastics living at the monastery, 200 monks have come from His Eminence’s monastery in Orissa, India, and 100 monastic and lay disciples have arrived from Bhutan, along with several white-robed ngakpas, or lay tantric practitioners. The khenpos from the nearby Namdroling monastery are attending the empowerments as well. All of this has created an impressively large section for teachers at the front of the shrine room. More than 200 local Himalayan Nepalese are also attending the empowerments, a sign of His Eminence’s deep connection with the people and dralas of the region.

Besides the large numbers of Asian students here for the event, there are a great many westerners in attendance. The western Ripa section in the shrine room behind the monastics is also quite large. A great many students have arrived from Russia and Ukraine, Spain, France and Switzerland—all over Europe—as well as North America. The languages and accents heard here seem to echo from everywhere on the planet. 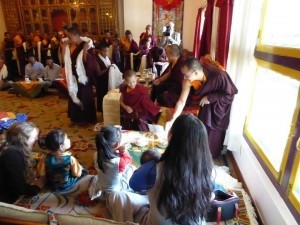 There are over thirty Shambhala students here for the empowerments, about twice as many as attended the Rinchen Terdzo received by the Sakyong from His Eminence in Orissa, India in 2008-2009. Several of us were at that event too, and it has been heartwarming to be reunited with friends from Asia and the West. Young monks that were cute and playful eight years ago are now a foot or more taller, and are helping out with the rituals as adults. It is amazing to see the sangha growing and maturing. The atmosphere here is palpably kind, generous and gentle. There are many older Tibetan laypeople that clearly arrived in Nepal and India over the past few decades. Their devotion and warmth is a great gift to see, particularly at dusk when large groups—young and old—are circumambulating the main monastery building as they recite mantras. The entire monastery courtyard is tented to accommodate the overflow of empowerment recipients. The inspiration of being immersed in a vibrant and thriving Buddhist world is hard to put into words. It is as though a strong culture is able to plant kindness in itself, and those who touch it, simply by sharing smiles and kind glances.

Written by Walker Blaine, Master of Liturgies to Sakyong Mipham Rinpoche. He has studied extensively with the Sakyong and has been part of the Shambhala community for more than 30 years.