Gesar: Heart of the Gongter Empowerments 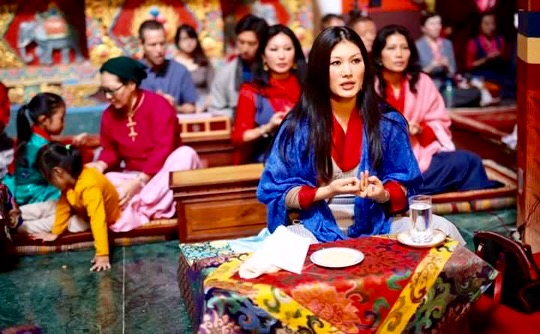 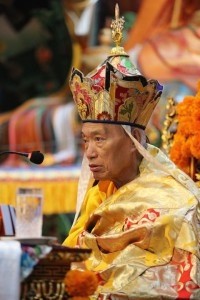 After the first five empowerments of the Gongter, Namkha Drimed Rinpoche’s Termas of key practices in the Nyingma lineage, we moved into what could be considered the heart of these transmissions, the empowerments for practices related to Gesar of Ling. Anticipation for this section of the Gongter was high. Many people had come to Pharping specifically to receive these Gesar teachings, for which His Eminence is most famous. The number of buses with day-guests from Kathmandu seemed to double. Since the shrine room held 800, and the porch and courtyard were accommodating far more than that, we estimated that nearly 2,000 people received the Gesar empowerments. Some came from as far away as Tibet and Bhutan. An elder lama explained to me that in Tibet there are many people devoted to Gesar through the vast tradition of stories and songs about him, but until now there was no practice path for people to follow in Gesar’s footsteps. That explains why this was such an important event for the Tibetan community. 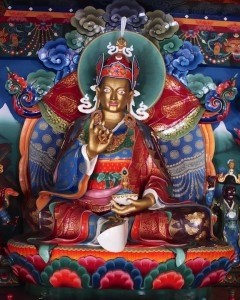 The Gesar section began with an empowerment for Gesar as a guru, a peaceful form of Gesar of Ling. In any progression of practice, we have to relate to the principle of the teacher first. The form of Gesar as a guru looks very much like Padmasambhava’s most well known form, but with some subtle differences; for example, there is no khatvangha, or staff, at his side. 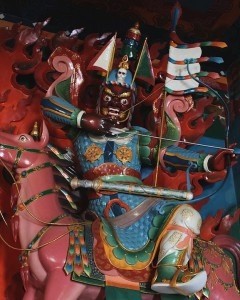 The next afternoon we began receiving several days of empowerments for Gesar’s enlightened activity, the different forms that Gesar will manifest in depending on the needs of a situation. These manifestations correspond with the four enlightened activities:  pacifying obstacles; enriching life; magnetizing virtue by increasing merit, wealth and lungta; and wrathfully overcoming the enemy of our own deepest negativity. Gesar generally manifests as a wrathful warrior, with the first three activities of pacification, enrichment, and magnetizing seen as branches of his primary, wrathful aspect. At the same time, even when he is wrathful, he is never separate from the peaceful aspect or from compassion. 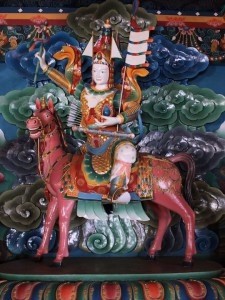 Along with these empowerments came one for a newly discovered Terma that brings Gesar together with the peaceful and wrathful deities of the bardo, or after-death state. This empowerment corresponds with the last section of the Gesar epic, when Gesar travels to the hell realms to release the conscious state of those beings that descended there after being killed in the wars between Gesar’s kingdom of Ling and the barbarian countries surrounding it. The final empowerment in the Gesar series was for Gesar, Lord of Drala, the most secret aspect of Gesar, where he is seated on his horse wearing brilliant golden armor. In addition to the human anticipation of the beginning of the Gesar empowerments, there also was a major non-human sign—a massive rainstorm the evening before the empowerments began. When we arrived at the monastery for breakfast the next morning, we found that the huge tent erected over the monastery courtyard had collapsed under the weight of rain the night before. Fortunately, no one was hurt, even though the collapse of the metal beams could have easily caused great damage. It is said that powerful rainstorms are not uncommon before His Eminence presents major Gesar teachings. 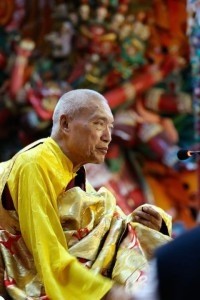 Throughout the Gongter and especially during the Gesar empowerments, there was a sense of profound poignancy. On the most apparent level, this was because the empowerments were being bestowed for the first time in their entirety. The event felt as though it was a crowning jewel for Namkha Drimed Rinpoche’s life of compassionate activity in Tibet and throughout the world. However, there were many other layers of meaning surrounding what was happening. For example, the Gongter was bestowed on the sacred ground of Pharping, the place where Padmasambhava tamed seemingly insurmountable obstacles in Nepal many centuries ago. This added an immediate sense of protection and strength, almost as if the Gongter were a response to the devastating earthquake that had happened less than six months earlier. A few days into the event, there was a small quake during a break in the day, which was a sharp reminder of the fragility of life and the preciousness of this situation. The Gongter was a complete gathering of all of Namkha Drimed Rinpoche’s close students, as well as all of the Ripa family. The empowerments and reading transmissions were given first to the Sakyong, then to Jigme Rinpoche and the other main Ripa lineage teachers, as well to as the Sakyong Wangmo and all the family. Most Terma lineages are held by the blood descendants of the Tertön, so this family connection was crucial for the lineage to be fully upheld in the future. In a sense, the Gongter sealed the lineage of His Eminence’s Termas, which are one of the two main streams of teachings that the Ripa lineage maintains, the other being the Termas of 17th century Tertön Taksham Nuden Dorje. 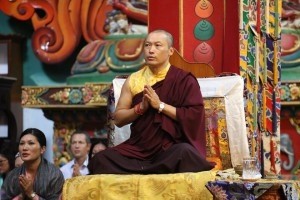 The Sakyong and Sakyong Wangmo

There was a special significance to the Gongter because the Sakyong was fully receiving the Gesar teachings of Namkha Drimed Rinpoche, who himself was a student of the first Sakyong, Chögyam Trungpa Rinpoche. Gesar of Ling, along with the Rigdens of Shambhala, is the source for the Shambhala Terma teachings, and it was wonderful to witness the Sakyong receiving the Gesar practices and teachings of probably the most prolific living Tertön in the world. At one point toward the end the event, His Eminence kindly bestowed the transmission for the Gesar practice that Trungpa Rinpoche had specifically composed for him. This was a true blessing for everyone at the Gongter, particularly younger, modern Tibetans who might not have been aware of Trungpa Rinpoche’s life and activity. Around that time, during the Gongter’s morning reading transmissions, there was a long section specifically devoted to Chögyam Trungpa Rinpoche, for which Lhuntrul Rinpoche paused to read the Tibetan more slowly so that everyone could hear—and about which we hope to learn more soon. 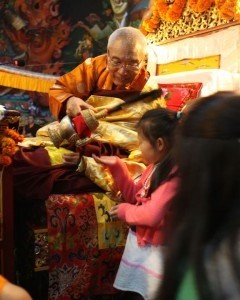 His Eminence and Jetsun Drukmo

While in Europe earlier this year, the Sakyong was asked why he would take so much time to receive the Gongter in the midst of so many other important programs and initiatives within the community. His response was that he had to hold the lineage in order to pass it on to his children, who would in turn be holding the lineage as well. All of these teachings will become part of what the future generations of Sakyongs carry forward, and will be part of what is protected. 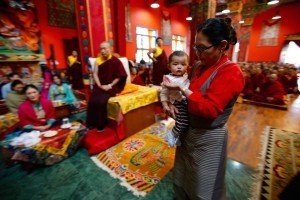 This was something all of us could witness happening during the empowerments, because Jetsun Drukmo, Jetsun Yudra and Jetsun Dzedron were present throughout the event, receiving the abhishekas with the family throughout the afternoon rituals. Jetsun Dzedron, just six months old, was carried to His Eminence’s throne by her grandmother Khandro Chime, or her great uncle Tulku Karma Shedrup, who took turns carrying her. They also carried Jetsun Dzedron’s two-month old cousin, the newborn son of Lhuntrul Rinpoche, to receive the various icons and blessed substances from His Eminence. 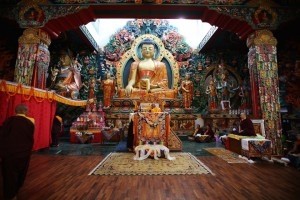 One thing that was remarkable about the Gongter, and especially the Gesar empowerments, was the sense of familial intimacy, even with such a huge group of people. It wasn’t that everyone suddenly knew one another, but that there was a shared, felt experience of how we were all being touched by the heart-mind of Namkha Drimed Rinpoche. This atmospheric feeling was palpable, whether one was simply following the visual imagery of the ritual, or closely following the words of the ceremony through the translations in English and Nepalese, or listening on the FM radio bands dedicated to different language groups.

The closeness of mind I am describing was not simply due to the fact that His Eminence was a teacher presenting teachings on Gesar. It was the interweaving of many different factors, primarily based on the significance of being a Tertön, or treasure-revealer. To be a Tertön means that one’s mind is equivalent in realization to Padmasambhava. In other words, to receive teachings directly on the level of mind from a realized Buddha like Padmasambhava, the Tertön’s mind must be equally open. This became clear as we heard the stories at the start of each empowerment about when and where His Eminence received the teachings, all starting with visions when he was a very young boy. These stories echoed those of the Vidyadhara and all other great Tertöns. We were in the presence of someone whose experience was incredibly refined and profound. Through empowerment rituals His Eminence was symbolically and directly pointing out what it meant to be in tune with such extraordinary wisdom. Knowing this, and feeling this happening, created a sense of being in one huge multi-lingual, multi-cultural family receiving the blessings of Gesar.

Walker Blaine is Master of Liturgies to Sakyong Mipham Rinpoche. He has studied extensively with the Sakyong and been part of the Shambhala community for more that 30 years.