Excerpted from The Words of My Perfect Teacher by Patrul Rinpoche. 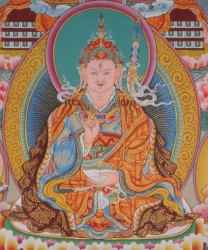 Gautama, the Buddha was born in Northern India in the fifth century BC, the son of a king who brought him up as heir to the throne. His birth and youth were remarkable, and it was clear from the beginning that the young prince Siddhartha was destined to be an extraordinary being. His early life was spent in palatial luxury, with few worries or cares, and he excelled in all the pursuits of his time, both academic and athletic.

Before long, however, he began to doubt the validity of his worldly life. Fleeing his father’s palace, he sought a more meaningful life, studying under a number of highly regarded masters of philosophy and meditation. Such was the sincerity of his quest that he rapidly achieved the highest meditational accomplishments that these masters could teach him, but he was still not satisfied. Despite years of strenuous ascetic practice, he found that none of these systems could take him beyond the limits of conditioned existence. He decided to continue his search alone, and through his own efforts finally attained enlightenment at present-day Bodh Gaya. What he discovered was so profound and vast that at first he was reluctant to reveal it to anyone else, fearing that none would understand it. Later however he began teaching, and quickly attracted a large following of disciples, many of whom became highly accomplished in meditation.

The diversity of people who came to the Buddha to receive his teaching and practice his path called for a corresponding diversity in the way in which he taught, and different individuals or groups received different instructions appropriate to their respective temperaments and intellectual abilities. The teachings that the Buddha taught during his lifetime can therefore be broadly divided into three categories – those that were eventually collected together in the Pali Canon and form the basis for what is now known as the Theravada School, emphasizing moral discipline and ethics; the teachings of the Mahayana, or Great Vehicle, which stress compassion and concern for others; and the tantric teachings of the Vajrayana or Secret Mantrayana, which use an enormous variety of skilful methods to bring about profound realization in a relatively short time. The latter were given by the Buddha himself only on a limited scale, but he predicted that they would be spread in this world by other enlightened beings, who would appear later. This is why the Vajrayana is no less a Buddhist teaching than the other two schools, even though it was not widely taught in the Buddha’s lifetime.

After the Buddha’s death the differences between the various teachings that he had given became more rigidly apparent as different schools and traditions took shape. The present Theravada tradition, for example, has its beginnings in a group of the Buddha’s disciples which later divided into eighteen schools. The Mahayana similarly diversified into a number of traditions, each with their own subtly individual philosophical differences. The same is true for the Vajrayana, in which there is an immense variety of practices, many of which were originally taught only to a single individual.

During the centuries that followed, these different traditions were gradually propagated all over India and further afield, until Buddhism had extended its influence through much of Central, Eastern and Southern Asia, even as far as Indonesia. Some traditions were lost entirely, others merged into newer forms of Buddhism. By the thirteenth century, AD, the arrival of Islam and political changes in Indian society had driven the Buddhadharma from its land of origin, and it was in other countries that the teachings were preserved – the Theravada in Sri Lanka, Burma, Thailand and Cambodia, the Mahayana in China, Japan, Korea and Indo-China, and the Vajrayana mainly in Tibet. Tibet was doubly fortunate. Not only was it one of the few countries in which the Vajrayana continued to be practiced, it was also the only one in which the full range of teachings, from all three traditions, was transmitted and preserved.

Over the centuries these many strands of the Buddha’s teaching have been handed down from master to student in the numerous lineages which comprise the four main schools of Tibetan Buddhism we know today. The members of these lineages were not simply learned scholars who studied the teachings they received, but fully realized individuals who had practiced and mastered what had been transmitted to them, and were thus fully qualified to pass on the teachings to their students.

Of these four, the Nyingma school (whose name derives from the Tibetan for “old”) follows the traditions which were originally introduced in the eighth century by such Indian masters as Santaraksita, Vimalamitra and Padmasambhava, whom the Tibetans refer to as Guru Rinpoche, “the Precious Master,” and handed down through fully realized Tibetan masters such as Longchenpa, Jigme Lingpa and Jamyang Khyenste Wangpo. The lineages which have been passed down to the other three main schools – the Kagyupa, Sakyapa and Gelugpa – were introduced into Tibet after the tenth century following the attempts by an anti-Buddhist king to destroy the Dharma in Tibet. Just as the different forms of Buddhism in other parts of Asia had been adopted and had evolved to meet the needs of different peoples and cultures, each of these four schools had its origins and development in widely diverging situations – historical, geographical and even political – which served as a prism to split the light of the Buddha’s teaching into a many-coloured spectrum of traditions and lineages.

The enormous range of teachings to be found within Tibetan Buddhism can nevertheless be summarized by the Four Noble Truths, which the Buddha expounded shortly after his enlightenment. The first of those points out that our conditioned existence is never free from a state of suffering, never truly satisfactory. Any happiness we have is only temporary and in due course gives way to suffering. The reason for this, as explained by the second truth, is that any action one may do, say or think gives rise to a result which as to be experienced either later in one’s life or in a future life. Indeed, rebirth is the result of one’s actions, and the conditions into which one is born in one life are directly dependent on the actions one has done in previous lives, and particularly the motives and attitudes involved. This, the principle of cause and effect, explains why, for example, some people remain poor all their lives despite their efforts to become wealthy, while others have everything they could want even though they do nothing to gain it. The second truth goes on to show that the driving force behind our actions is the negative emotions such as hatred, attachment, pride, jealousy and, especially ignorance, which is the root of all of the others. This ignorance concerns not only a lack of wisdom in how we act, but the basic ignorance behind how we ordinarly perceive the whole of existence and constantly become caught in our clinging to the idea of our own egos and of the outer world as solid and lasting. Because there is no end to our actions, there can be no end to our continuously taking rebirth in the cycle of conditioned existence. Only when we cease to act through ignorance can this cycle be broken, as shown by the third truth which expounds the cessation of suffering and freedom from conditioned existence.

The fourth truth explains the way through which this can be achieved. This essentially means, on the one hand, the accumulation of positive actions, such as venerating and making offerings to the Buddha, Dharma (his teaching), and Sangha (the community of practitioners), and practicing charity and so on; and on the other hand, the practice of meditation, which can directly dispel the root ignorance which is the cause of suffering. A practitioner who follows this path with only his own liberation in mind can attain a high degree of realization and become an Arhat (one who has overcome negative emotions.) But this is not full enlightenment. Only those who have as their motivation the good and ultimate enlightenment of all other beings can attain final Buddhahood. Such practitioners, who follow the path of the Great Vehicle based on compassion, are known as Bodhisattvas. A Boddhisattva who moreover practices the profound and skilful teaching of the Vajrayana is able to become fully enlightened in a very short time.

During his lifetime the Buddha created a community of monks and nuns who became the core for upholding and continuing the teachings. This did not, however, exclude lay men and women as serious followers of the path, and this was reflected in Tibet where, from the 8th century onwards, the community of practitioners comprised two complementary congregations: on the one hand, a very large monastic community, and on the other a strong tradition of practitioners with lay ordination, whether yogis or householders, many of whom would appear to be leading ordinary lives while following an inner spiritual path and eventually attaining full realization. Within the Nyingmapa tradition monastic ordination is considered a very useful support for the practice, but by no means the only way to progress in meditation. This is encouraging for those who seriously wish to put the teachings into practice but are unable to involve themselves in a monastic lifestyle.

Albert Einstein once pointed out that Buddhism was the tradition that he felt fulfilled the criteria he thought necessary for a spiritual path adapted to the twentieth century. Today modern physicists are drawing conclusions which approach the doctrines the Buddha expounded two thousand five hundred years ago. While the attractions of materialism have had an adverse affect on traditional spiritual life throughout Asia, there are increasing numbers of people in the West who are showing an interest in the possibilities offered by the study and practice of Buddhism.

When the continuity of the Buddhist lineages was threatened by the political changes in Tibet in the nineteen fifties, numerous qualified lamas, who had not only received the proper lineage transmissions from their teachers, but also, through study and meditation, gained full understanding and realization of the teachings, sought to preserve them by bringing them to India. At the same time, some Western visitors to India began to show an interest in these lamas and their spiritual heritage. Since it has been said by Guru Rinpoche, that, of the Buddha’s teachings, the Vajrayana would prove especially powerful and effective for individuals living in a time when emotions are stronger than ever, many teachers felt that it would be appropriate to introduce these teachings to the West. The Vajrayana is particularly flexible and adaptable to the sorts of situations in which modern people find themselves, and, without losing its traditional form, has now been taught to a wide range of people all over the world.