A great event took place in Pharping on October 29-30, 2012 – A Stupa in H.E. Namkha Drimed Rabjam Rinpoche’s monastery was blessed. 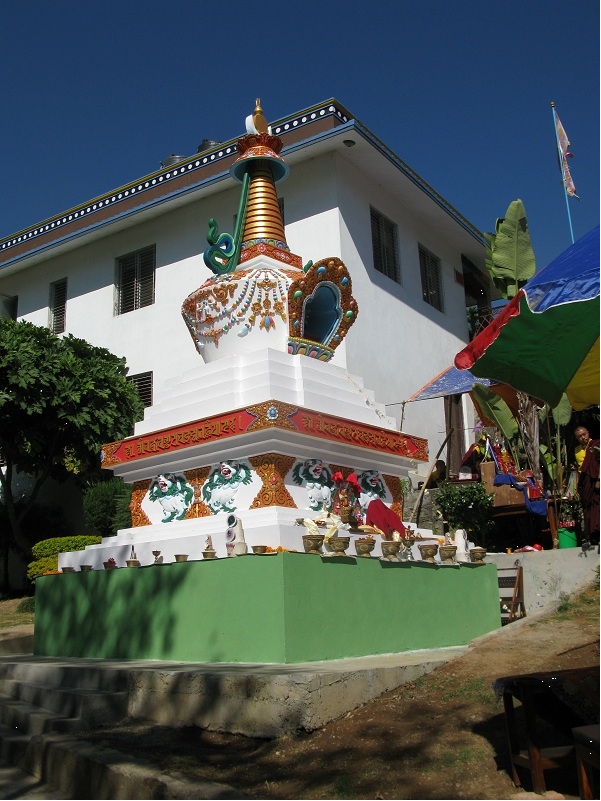 Maria A. telling: “An idea of constructing a Stupa was born in Summer 2010. I had an audience with Kyabje and he had mentioned he was dreaming of building a Stupa in his monastery. I was dreaming to construct a Stupa in Moscow and in Moscow’s Region, but the situation with the location and building permissions did not work out. When I heard Kyabje wanted to construct a Stupa, I responded immediately. It was a wonderful opportunity and I sent the money needed for the construction in a few days time. However the construction of the Stupa started only in 2011 because Lama Tashi – an experienced Stupa-constructor – who was supposed to play the role of an architect, was in retreat.”

The construction was completed in Spring 2012, and the Stupa was then painted. (The monks have told me that the local citizens admire its beauty a lot.) Kyabje identified the date of the consecration during his visit to Russia in August. 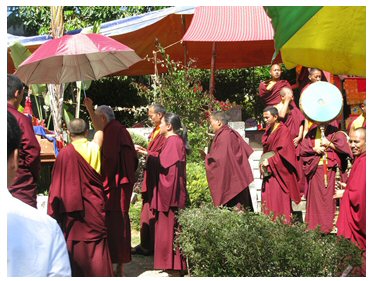 Semo Sonam and her son came as the honored guests (photo below). 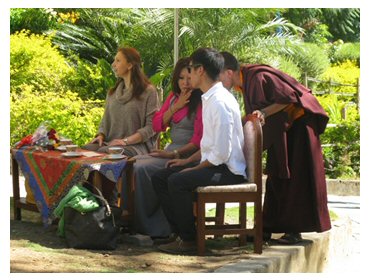 The ceremony was very beautiful and it lasted for two days. Surely, pictures cannot completely reproduce the atmosphere, but they do partly. The ceremony included text reading, mantra accumulation, prostrations, going round the Stupa, different offerings to the Stupa and so on.

By the way, we should thank Masha K. for the photo report. She was in Pharping during these days “by accident” and we had met a day before the ceremony “by accident” in one of the local restaurants. She had also had a camera “by accident” and she agreed to be a photo-reporter during this event.

H.E. Namkha Drimed Rabjam Rinpoche Drimed Rinpoche told me during the ceremony (Semo Sonam was translating to me so I do not quote literally): “The good motivation and a connection with Stupa construction are needed for a Stupa to be created. I have noticed your good motivation during our first meeting. And when we’ve been speaking about a future Stupa in Pharping in 2012 I saw you had a connection with Stupas. I’m very happy that this Stupa was constructed, that it will influence all the world and help living beings.”