The great Terton Namkha Drimed Rabjam Rinpoche, pillar of teachings from the earlier translations, fourth generation of the Ripa family lineage, master of profound mind treasures and the lord of refuge was born with amazing signs on the tenth day of the first month of the Tibetan calendar. He was born in 1939 in Rigon Tashi Choeling, belonging to the upper part of Tsawagang in the south of the great land of Tibet. 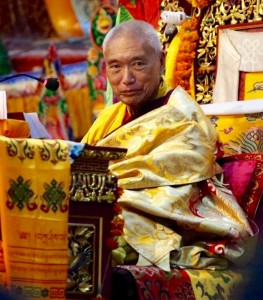 His Eminence’s father was the Ripa family lineage holder, Jigme Tsewang Chogdrub and his mother, Palden Tsomo, was a descendant of the Shakya Shri family. As a child he preferred to be involved in dharma activities like conferring empowerments, teaching the dharma and participating in monastic dances.

The son of Shakya Shri, Phagchok Rinpoche, recognized him as the incarnation of the great Terton Yoeunge Mingyur Dorje and gave him the name Namkha Drimed Rabjam. From a very young age, he remembered clearly his previous lives, including the time in Ling, where he was Bumpa Gyatsa Zhalkar, the elder brother of Gesar.

He received the vast and profound ripening and liberating nectar of teachings from many great masters. They were holders of teachings from the school of translation, primarily Nyakrong Terton Jigme Choeujung Lingpa, the Yogi of the Dzogpachenpo of clear light and his father, Jigme Tsewang Chogdrub, as well as the pillars of teachings of the early translations, the lords of refuge H.H. Dudjom Rinpoche and Dilgo Khyentse Rinpoche. 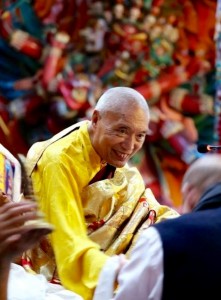 retinues and received many prophecies and transmissions, including the single embodiment of the lords of the three families, Gesar Norbu Dradul. As the vast and profound mind treasure teachings were spontaneously revealed to him, especially the liberator Wrathful Gesar, he began to write and record the various teachings of the time. He also established two new monasteries, Rigon Thubten Mindrolling in Orissa, India, as well as Rigon Tashi Choeling in Pharping, Nepal.

Rinpoche has practiced the teachings of the great Terton Taksham Nuden Dorje in keeping with his great consideration for them, conferred empowerments, oral transmissions and instructions. He has spread those teachings widely and has written many new practices to make them clear. He has added much to the tradition with his immeasurable kindness.

His Eminence has twice conferred the empowerments of the Rinchen Terdzo and five times the empowerments of the Taksham Yidam Gongdeu. In addition, he has twice conferred his own entire mind treasures on the cycle teachings of Gesar. By these activities, he has turned the unsurpassable ripening and liberating wheel of dharma for all students, without partiality, in the east and west.

By bestowing his blessings and protections, he is liberating people and those affected by various sicknesses and other obstructive forces. Many have made meaningful connections to him as a result of his holy activities. He remains as a glorious protector of infinite teachings and beings and as a Vidyadhara of the secret Mantrayana of the Nyingma School.

May his lotus feet stand firmly!